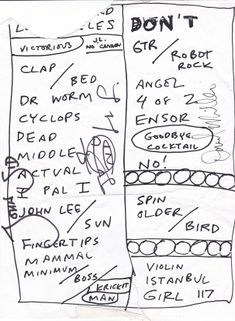 JL: We have a new album out for kids, and by "kids" we mean "older people with developmental problems."

JF: Thanks for coming to our secret show! JL: Here in our secret mountain laboratory. (The Ford Theatre is basically a pit on the side of a hill so it did sort of have that feel to it.)

JF: Something about the cold air is making our instruments out of tune. So that's why I'm doing my "Jerry Garcia in silence" thing here. (while tuning his guitar) JL: Well I think the cold makes everyone's ears out of tune the same amount. JF: This next song is about a super-embittered guy with just one eye.

JF: It's actually comfortable on stage here. The last time we did a show here, in the late '80s, it was the middle of the day and we had this backdrop made entirely out of foamcore. And we could just hear *weird crumpling up noise* behind us from the heat on the backdrop...This song was written as a public service announcement in the '60s for kids in New York, but I think it's even more appropriate for LA kids now.

JL: (while JF is attempting to tune his guitar again) Some people came here straight from The Guitar Center and this out of tune thing is ruining the show for them. JF: (gives up and gets a yellow guitar, while audience cheers) And the center is made entirely of chocolate. JL: We look at our hands on part of this next song. (Fingertips)

(Between Man, It's So Loud in Here and Don't Let's Start) JF: The disco ball. (audience cheering) That is a beautiful effect. It makes me feel like we're going back in time. JL: Speaking of that, here's a song we probably played the last time we were here, in the 80s.

JL: I don't know if you've had a chance to look around here, but behind us there are these little steps, and they go up to more little steps, and the steps go all up the side of this mountain, and then, right before you get to the top of the mountain, there's another They Might Be Giants concert. I went to check it out, and you guys came to the right place. Cos those guys *suck*...all they play is power ballads. (starting to play She's an Angel) Wait, *this* is a power ballad.

JF: We want to thank the audience individually, starting with the guy in the tie.

JF: We got these headsets from Al Gore, and y'know that thing Perot said about a guy on the other end telling him what to do? How do you get that guy to shut up?

JF: We also want to thank two guys we'll never meet: the spotlight operators. Shine the lights on each other so we can see your faces...ok, we can see the one on the left, but not the guy on the right. JL: Oh my god, he doesn't have a face!

We got there really early (2:30 for a 9 o'clock show) so we got to look inside the equipment truck. Saw The Stick tied to one of the walls and a blue Schwinn which I assume was John's. (Iggy still has his scooter and was riding it around the parking lot quite a bit.)

Also got to see John arrive in a rental car with Karen, Henry, and some other woman. Kevin and Mike (DigitalSquid here) saw John and Henry at the tar pits earlier in the day...they got to talk to him for a minute but when Rich and I tried to here he just said "Hi I'm kinda busy" and ran off to figure out where they were supposed to put the car.

We tried to listen to soundcheck but got kicked out by security so we got our spots in line in front of the building. At six they let us into the gates, and after climbing way too many stairs we ended up at another set of doors. The fucked up thing was, there were four different doors that all went into the theatre, and they all opened at the same time (an hour later--I spent that waiting time trying to explain to the woman guarding the door that there's a whole wonderful world of TMBG beyond her experience, which was--big surprise--"that album with that Birdhouse song on it."). In other words, people who had gotten there much, much later than we did could get in front of one of the other doors and if they ran faster they would get better seats than us (it was general admission). Which is why, even though I ran as fast as I possibly could, I ended up in the second row. Which I suppose isn't that bad really, but I'm used to being first, especially when I've been waiting *all fucking day*. Grr.

Common Rotation opened. They were decent...not as good as OKGO or Muckaferguson, but not as bad as The Moldy Peaches. The way one of them kept humping his keyboard stand disturbed me a bit. Apparently Weinkauf is going to be on the album they're working on right now (or did we already know this? It was news to me, at least). They did that country version of Don't Let's Start, which was a lot funnier in person than on the mp3. All three Dans were sitting on one of the walkways watching them.

The setlist (which I'm going to scan as soon as my scanner starts cooperating with me again) has "J.L. NO CANNON" written at the top. Since James K. Polk wasn't even on the setlist, I assume it was referring to Bed Bed Bed, which I guess they're using it on now. "117" is written next to How Can I Sing Like a Girl. I have no idea what that means. And "DON'T" is written over something, which upon examination turns out to be "EVERY". After the show I told Flans how much we'd been looking forward to that. "Oh, we didn't do that tonight?" He promised to do it and On the Drag at the next night's show. (Writing this a few hours before, so it remains to be seen if he keeps his word on that.) Also asked him if they're going to play Statue like the site said or not. "Oh, we have. But it's not quite together." (I assume he was either bullshitting or meant at a rehersal, cos I haven't heard anything here about them doing it at any actual shows.)

Before Actual Size Flans did this whole little thing about the difference between a real sax (John of course, rocking out on it more than usual), which "has the blues", and its enemy, the fake sax (Miller on his MIDI guitar), which has "the shitty, shitty blues". (He was swearing a lot even for him--there was also "When I say 'Dan Miller!' you say 'Fuck yeh!' during Guitar. Maybe he's trying to get it all out of his system before the No! show on Sunday.)

Flans seemed a little out of it--maybe the tuning problems were really throwing him off. He didn't come in where he was supposed to at the beginning of Supertaster but John, looking highly amused, sang the "nothing tastes the same" and "tastes a pear" background parts anyway. He also let the beginning of Guitar be instrumental way longer than it's supposed to.

No estrogen during Sun, which startled me. Instead there were what I assume are parts of LA. Silver Lake, West Hollywood, and Eagle something.

Spin the Dial didn't go that well—they ended up trying to provide background music for talk shows and commercials. Putting it (and Birdhouse) in the encore was very weird.

John's shirt (orange pocket t) was tucked in (to the usual black jeans) and he was wearing a belt, which was a little odd. Before the show he had that red long-sleeved shirt he wore at a few of the in-stores tied around his shoulders, how dorky/adorable is that?

Overall, a really excellent show. The crowd was on their feet the whole time and seemed really into it. And it was exciting for me because other than my first show and the Sapphire Bullets show I don't think I've ever had so many first-time songs (Clap, Bed, Middle sung by Flans, adult Robot, No!, Violin, Girl, and non-accordion-only--from the MC in-store--Mammal and Ensor, plus Palindrome, DLS, and 4 of 2, all of which I'd only seen once). It was also my first full show without Polk and NYC and only my second without Particle (not that I'm complaining, although I found that since it's been two months since my last show even stuff I'd seen a million times like Actual and Fingertips was fun).