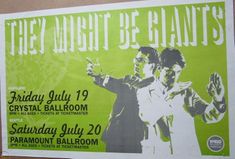 Review by Alex:
Well, I wanna say, wow. It was well worth the wait (almost 3 years!). I got there early enough to get front row, Flans. What an awesome show, the Crystal stage is about 3 or 4 feet off the gorund, so he was RIGHT there in my face rocking out, it was awesome. I picked up a copy of They Got Lost and a No! shirt, got Flans' autograph, and a picture taken with him. The show was full of surprises, a lot of the packaged stuff (Dial a Drum) with different things added on, anyway, on to a breakdown.

Quick note: Dan Miller was absent from this show. They made a vague reference as to why he wasn't there and when I asked Danny Weinkauf after the show, all he said was that Dan would be joining them Sunday in Seattle for the kids' show. Without the lead guitar, it made for some very interesting musical moments (bridge of Boss of Me, Cyclops Rock solo, etc.)

Linnell seemed to be having some problems with the connection on his accordion mics, there were some BOOM sounds during the song

Standard Dial-a-Drum except at the end it was a cross between Buddy Rich and Animal with a "random toggle" between the two. Dan Hickey pulled it off really well and he and Flans were all smiles

As John started the song, some guy lit up a J and it was stinking up the place, so when John began the breakdown, he came out to the front of the stage and sang something to the extent of: "Somebody's smoking some old pot...throw that shit away...cheap is one thing..." you get the idea, he then went into the beatboxing

Cool to see them doing it again, it rocked as usual

During this, Flans mentioned that although they had sold 1200 tickets in Seattle for the Paramount show, it was a 2000 seat venue, so if people wanted to make the drive, he would put them on the guest list in Seattle. Reading the NG about the SF show (or wherever he mentioned the whole "putting people on the guest list" thing) I knew he wasn't BS'ing us, so I got on the list for tomorrow night as well.

L: This song is about the man who actually purchased the Oregon Territory. If it wasn't for him, we'd all be eating vinegar and french fries, and fish prepared in a really weird way."

These 2 girls in the front row, whenever someone would come out and whip it (their instruments) at the audience rock star style, they would reach out and grab their feet. Danny Weinkauf came out in front to take a solo on Older, and when he was out there for a considerable amount of time, the girls were stroking his legs and like, petting him. It freaked me the hell out! Anyway, that was just about the only weird thing.

Review by Olivia Felo:
This was my first TMBG concert. I went with my mom (chauffeur) and my best friend and band-mate Jessica. We had dinner at a seafood place about a block from the venue and a guy walked by whose face I didn't see, but Jessica said he looked EXACTLY like John Linnell. I only saw him from the back but I remembered he was wearing a green ringer shirt with black pants, and at the show later on John Linnell was wearing the SAME THING. What are the chances? Anywho, that's nothing interesting.

I don't remember the name of the special guest, but they were an acoustic guitar-singer/singer duo from L.A. They were really good, had lots of energy and a good sense of humor. They did a cover of Don't Let's Start, but it SUCKED REALLY BAD. They did all wimpy Lilith-Fairsy style. But other than that they had a good show.

When the Giants came on I almost cried. They had so much energy, except for John Linnell, but I guess that's sort of his thing......he needs to maintain his mystique. They played for about two hours, with two encores. Somewhere near the beginning Jessica and I, well, I under the influence of Jessica, threw a copy of our demo tape up on stage hoping to hit Linnell's ankles and get his attention, but seeing that I've skipped P.E. almost all my academic life my aim is TERRIBLE. Dan Weinkauf saw it though and kicked to the side of the stage.

Jessica and I were the only people touching Flans's ankles, and then he gave a speech about respecting other peoples' personal space. See, towards TMBG, Jessica and I are like N*Sync fans, because in a NORMAL world TMBG would be the N*Sync. People with the real talent would get more love and respect. Anyway, after the show I crawled onstage and grabbed John Linnell's sweat rag(!!!)........And the security gaurd yelled at me. But THEN I had to get our demo, so I had to crawl onstage and get yelled at by the security gaurd AGAIN.

Flans was signing autographs and I we had him sign our ticket stubs. We had a pretty nice conversation w\ him, too :o). Then, we gave him our demo and he was REALLY enthusiastic about it. He said he's make sure to listen to it and ect. Then he gave us what he called a "Rock'n'Roll Hug" and we were off going home to our stupid hick town an hour away. Today I framed and hung on my wall my autographed ticket, and pieces of the conffetti that was shot from cannons during James K. Polk. I'm still getting over the greatest night of my life.