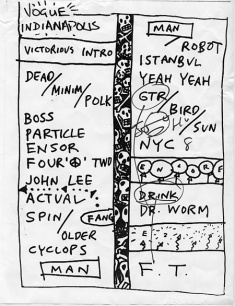 Setlist: (scan; changes as below)

They Might Be Giants
— with OK Go opening —
The Vogue in Indianapolis, IN
April 4, 2002

I went to this concert more than two years ago, in the era before I had a digital camera, so I don't have too much left in my mind to share about it, but I have really fond memories of this show—not least of which is meeting my best TMBG buddy Jackie. Also, the Vogue is a really great place to see a show, cozy with a tiny little stage.

Anyway there are a couple moments that I don't want to be lost to history:

* Dan Miller came out for the last encore wearing a big black afro wig. I don't know where he found it, but I really wish I had had a camera with me.
* OK Go remains one of my favorite TMBG openers ever. The stage area was really small, so that the wings were basically onstage, and during TMBG's set the guys from OK Go were clearly visible in the left wings jumping around and dancing like fools. Flans eventually had to go over and ask them to leave, which they did, but during the first encore Damian (OK Go's lead singer/rhythm guitarist) actually came down into the crowd and pushed his way up to the front row next to us. He had a beer in each hand, but when Flans held his guitar out for the audience to play (during The Guitar), Damian put down his beers and reached out and Flans actually gave him the guitar. Damian proceeded to play a solo looking completely confused all the while, since he was playing Flans's left-handed guitar upside-down. One of my favorite show moments ever.

Afterwards Flans came out to sign stuff and in the crowd waiting there was a guy who was going to have him sign his baseball cap. His friend pointed out that it wasn't a TMBG cap but the guy said, "Oh, he'll sign anything. He'll sign your ass." Flans heard that and instantly said, "I won't sign your ass." So now we know that even Flans has his limits.