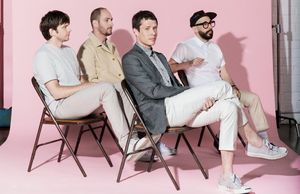 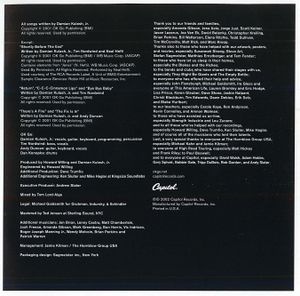 OK Go is a band based out of Chicago, composed of Damian Kulash, Tim Nordwind, Dan Konopka, and Andy Ross. They toured with TMBG as an opening act in 2001 and 2002, and became a favorite among their fans for their cover of "Kiss Me, Son Of God". The band became a favorite on MTV2 and has achieved success, known for their highly creative music videos. They also share TMBG's manager, Jamie Kitman.

They thank TMBG, especially John Flansburgh, in the liner notes for their self-titled album as well as in their sophomore album, Oh No. They contributed their rendition of "Letterbox" to the tribute album Hello Radio: The Songs Of They Might Be Giants. They contributed a cover of The Zombies' "This Will Be Our Year" to Future Soundtrack for America.

In 2020, Kulash expressed his admiration for Flood on its thirtieth anniversary.[1]