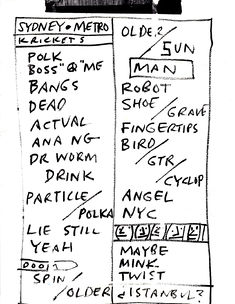 They Might Be Giants
The Metro in Sydney, Australia
December 11, 2001

review by Anthony Well the guys have done their first Sydney show last night, it was truly awesome. They did this bit in the middle where they pulled out a little radio and "played along" to the songs and stations that came through over the sound system. They happen to come across "Teenage Dirtbag" which was being played on one of our stations at the time and the boys jumped right in and ad libbed a special version. Their attempts at Reggae, Islamic prayer and classical radio stations could have been a touch more refined, but nevertheless it was total hilarity.

review by Peter Alexander Before I went to the theatre I spent some time reading other people's reviews of recent and past concerts. I was surprised by how much the set was similar to the ones played in the US. I figured that they wouldn't bring so much stuff down to Aus. They did have the cannon which shot the confetti out halfway through James K. Polk. John L didn't seem particularly on form to me. The other time I saw TMBG play was in the UK back in 1991. My dim recollection then was that the 2 Johns spent equal time singing and chatting to the audience. This time, he hardly sang any songs & looked rather fed up. He flubbed the intro to one of his songs. ['Bangs' I think] Flans however was in fine form. Lots of interaction with the audience. He used the 'estrogen estrogen' line at the end of 'The Sun is a Mass...' Before 'Shoehorn' JF used the vocoder & told us that he had a glockenspiel and that it couldn't come on stage until we all believed that there was one. A huge cheer went up each of the 3 times it was struck during the song. They did do the 'Spin The Dial' but not live. Teenage Dirtbag was one of the songs with JF singing in a ridiculously high falsetto. For 'Man It's So Loud In Here' they darkened the theatre and the glitterball came down. As usual they did 2 encores.