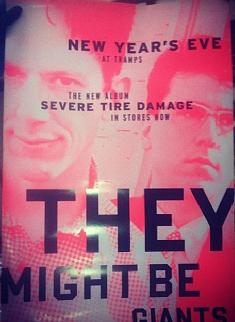 Great show, shitty audience. Carmaig De Forest opened. Audience made noise, talked throughout, and heckled him. He gave a better performance than TMBG. Amazing New Years, nonetheless. Sure beat rotting away in Connecticut.

Hey, now -- cut the audience some slack. At least one of us was gearing up to propose to his future wife outside the Flatiron Building later on that night.

"Ending the Year" by Mark Feldman (from music-critic.com):

First off, a sad story:

In today’s fickle pop world, it’s easy to forget that bands who are identified with years long ago and far away (1992 in this case) are still chugging along, trying to recapture the fickle audience they lost even quicker than they gained. Six years ago, riding on the heels of four fairly successful and often hilarious albums, it appeared that this quirky Boston duo, composed of multi-instrumentalists John Flansburgh and John Linnell, was on its way to geek stardom. Then something happened. They got a tad sick of the same old image on every album, hired a band, and got more musically ambitious. The aforementioned fickle audience expected carbon copies of Flood and Apollo 18, but instead got “John Henry,” an album that challenged even the twisted conventions TMBG had set for themselves to that point. But fickle audiences don’t like to be challenged. It should have been their breakthrough, but instead it was their breaking point; since 1994, John and John have had to settle for a return to cult status, while far less talented (but still good) bands such as Crash Test Dummies and Barenaked Ladies have ridden the style They Might Be Giants pioneered to superstardom.

There’s a happy ending to this story, which is that while Barenaked Ladies have gone mega-corporate, concurrently playing along to tapes in Las Vegas for Dick Clark’s “Rockin’ New Years Eve,” TMBG remains the true essence of a cult band. The crowd at Tramps was enthusiastic, singing along to nearly every song, and the Johns were funny, cheerful, and spontaneous. This wasn’t just a retread of oldies, this was a real show. Highlights included a breakneck “Spy,” in the middle of which the band broke into Hugh Masekela’s “Grazing in the Grass” and Chicago’s “25 or 6 to 4,” a punk rock version of the kids’ science classic “Why Does the Sun Shine?”, a crazy cover of “To All the Girls I’ve Loved Before” (sung alternately through a voice box and a long hollow tube), and a scary little gothic number to introduce the glockenspiel-playing drummer. Not to mention the impromptu jam session in which the band grouped themselves by first name - aside from the two Johns, four of the five band members were named Dan, the other Jim - and the crowd was instructed to repeatedly chant “Dan!” “John!” or “Jim!” depending on who was playing.

Also encouraging were the signs of new life in the Johns’ respective songwriting muscles - the new material held its own, particularly “Working Undercover For the Man,” a cute tune about a rock band sent to infiltrate its audience. But of course, the classics were there too. No “Istanbul” or “Don’t Let’s Start,” but more than enough to keep the diehards satisfied. “Ana Ng” was preceded by a clever chant of “Somebody took my eye / It was the only eye I had.” “Birdhouse in Your Soul,” “Particle Man,” “The Guitar” and “No One Knows My Plan” were all given justice, and pleasant surprises such “She’s an Angel,” “Mammal” and “Shoehorn With Teeth” abounded. All in all, a true New Years’ Eve blast, and a lot warmer than Times Square.