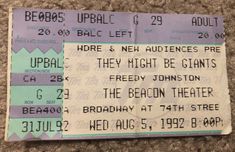 Until this year, They Might Be Giants performed as a duo (John Flansburgh and John Linnell, singing and playing guitar, accordion and reed instruments) with backing tapes that could sound like a carousel one moment, a stampede the next. The duo even wrote a song proclaiming that its minimal lineup was not a "rhythm section want ad." But things change, and at the Beacon Theater on Wednesday night, They Might Be Giants introduced a flesh-and-blood band, with bass, drums and keyboards. The new lineup traded some quick-change studio cleverness for clout, but could still hop styles and twist tunes with ease. Camouflaged as a rock band, though one with a polka combo just below the surface, They Might Be Giants were as tricky as ever...

Onstage, They Might Be Giants let the songs speak for themselves, with just enough joking to fill time between instrument changes. Where tapes had bound They Might Be Giants to their recorded arrangements, the band made new grooves, revving up "Dig My Grave" into something approaching hard core and deepening the funk of "Your Racist Friend." And they stretched the vaudeville-tinged "Istanbul (Not Constantinople)" with a futuristic coda of echoing voices in drawn-out harmony.

The band was greeted by an almost delirious audience, shrieking with glee at songs it recognized. So in the same way they skew pop craftsmanship, They Might Be Giants subverted a standard concert ritual. Instead of dividing the audience into groups for sing-alongs or competitive applause, the band cued the full house at the Beacon to simulate a plane crash: a downward swoop in the top balcony, "Oh my God!" in the loge, and "Boom!" in the orchestra seats. Like the songs, it was funny with an unsettling aftertaste.

They Might Be Giants grew larger at their Beacon Theater show Wednesday. For the first time in the duo's eight-year history, they expanded to include a bass player, drummer, horn man and backup singer. (Usually, the duo relies solely on a trusty backup tape.)

The difference was revolutionary. While the Giants' songs in concert used to sound dinky, the new band made them meaty. Anchored on the propulsive rhythm section of Tony Maimone (bass) and John Feinberg (drums), older songs like "Don't Let's Start" or "Cowtown" transformed from flimsy ditties into full-on rockers...
Watching the band underscored their oft overlooked musicianship, especially from John Linnell whose fleet accordion work asserted this resolutely unhip instrument as eminently pop-worthy. The group's other John (Flansburgh) also made a mark with terse guitar work and adorable singing. It was an ironic blessing that you couldn't make out all the lyrics; a neat way to deemphasize the snickers.
Of course, the show was hardly a sober affair. It's hard not to crack a smile during non sequitur-strewn numbers like "The Statue Got Me High," or "Purple Toupee." For more yuks, the group took time out at one point to coax the sold-out crowd to imitate the sounds of a hideous air crash. That's their idea of a sing-along.


Straddling the line between camp and earnestness was the group's choice of covers: Lesley Gore's "Maybe I Know" and the Edgar Winter Band's "Frankenstein." Such a balance served them so well this night that by the time they got to popular faves like "Birdhouse in Your Soul," they had the crowd wildly bouncing around like rubber bath toys — the perfect response to a brightly animated evening.