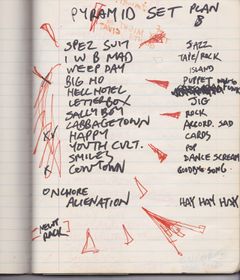 The setlist included on this page was from a scrapbook and was stated by John Flansburgh to be for a 1985 show at the Pyramid Club.[1] However, a majority of the songs were written or recorded around 1982 to 1983, and on the next page of the scrapbook, there is a setlist for the Dive, which the band performed at three days after The Pyramid Club in 1983. A majority of newer songs recorded in 1984 and 1985 are also not present here.

Interestingly, the setlist is labelled as a "Plan B" and contains a bunch of one to two-word descriptions for the genre and theme of the songs.

The exact date/year of the setlist has not yet been confirmed, meaning that it could be from another show that has been left undocumented.