No School Today is Danny Weinkauf's debut solo album for kids. On November 15, 2013, Weinkauf launched a Kickstarter campaign to fund the release of the album. The initial funding goal was met in only five days and the campaign closed at 160% of its goal. The album was released on April 29, 2014 on Idlewild Recordings and Megaforce Records with distribution by Sony/RED.

The cover art was created by EG Design, who also made a video for the song "Marsupial".

Samples of all the tracks are available on Weinkauf's website. More information about the album is available in Weinkauf's exclusive interview with TMBW.

Weinkauf wrote and recorded all of the music himself, with mixing and mastering assistance from Jeff Thall and Tom Durack. The album features acoustic and electric guitar, electric and stand up basses, piano and keyboard, drums, percussion, vibes, glockenspiel, horns, ukelele, banjo, and mandolin. Weinkauf's wife Michelle, and kids, Kai and Lena, contributed vocals, as did some of the kids from his neighborhood. Children's music star Laurie Berkner appears as a guest singer on the song "Our Love Fits." Danny also recorded a bonus track called "The Kidney That Lived In Four People" with Hank Green of the VlogBrothers, which they co-wrote. 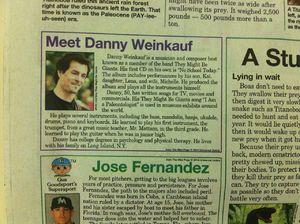 Mini Page blurb for the album

To date, official videos have been released for seven of the songs on the album:

No School Today received a "Silver Honor" in both the 2014 Parents' Choice Awards and the 2014 National Parenting Publications Awards. The album also placed #6 in the 2014 Fids and Kamily Music Awards. Two songs off the album charted on Sirius XM Kids Place Live's 13 Under 13 countdown, with "The Moon Is Made Of Cheese" reaching #5 and "Champion Of The Spelling Bee" reaching #1.