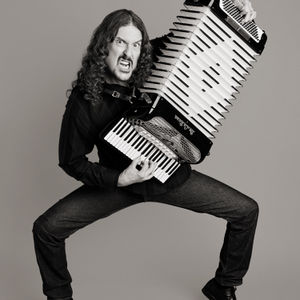 Yankovic rocking out in 2019

"Weird Al" Yankovic (born October 23, 1959) is an American comedy musician, known for his humorous parodies of popular songs and pastiches. He also plays the accordion.

Yankovic has often called They Might Be Giants one of his favorite groups, stating in a 2005 iTunes playlist, "TMBG... prolific, smart, funny, great guys. One of my all-time favorite bands." According to the audio commentary on the Weird Al Show DVD box set, TMBG was his daughter Nina's second favorite artist at the time of recording, with the first being Ben Folds.

In the late '80s and early '90s, Yankovic featured music videos by They Might Be Giants in three episodes of his Al TV specials: "Put Your Hand Inside The Puppet Head," "Don't Let's Start" and "The Statue Got Me High."

On his 1996 album Bad Hair Day, Yankovic wrote the original song "Everything You Know Is Wrong" as an homage to TMBG. Not only does it reference several TMBG songs musically, but lyrically as well. TMBG fan podcast Don't Let's Start released a YouTube video essay attempting to track all of Al's homages to TMBG in the song. On the same album, the song "I Remember Larry," a style parody of Hilly Michaels, is widely thought to contain a musical homage to TMBG's "See The Constellation," though this is unconfirmed by Yankovic.

On April 21, 2018 in Austin TX, Yankovic covered "Particle Man" live during his Ridiculously Self-Indulgent Ill-Advised Vanity Tour, in which he covered one song by another artist each night during the encore.

On the Ask Al feature on his website, a fan in September 1998 asked if Yankovic had ever met They Might Be Giants and he replied with:

TMBG is one of my favorite groups, and I've met the Johns on one or two occasions. I even asked them several years ago if they'd be interested in co-headlining a concert tour with me, but they weren't into it at the time. They were also too busy to do the Weird Al Show last year. What, is it my breath?[1]

In a preview from former TMBG drummer Brian Doherty's canceled book Memoirs of a Rock Drummer, Doherty wrote about a time that Yankovic came to a TMBG show in 1994:

"Listen up people! Weird Al is coming to our show tonight." I was behind my drum kit at sound check, just a few hours before show time. It was 1994, and I had been with this band for a little over a year. John Flansburgh raised his voice and continued, "Do not—I repeat—DO NOT take any photos with Weird Al, or invite him backstage." I turned to John Linnell to ask why Flansburgh (Flans) had given strict orders about something so insignificant. "We're trying to shake the yoke of geek rockers," Linnell explained. "Having a picture taken with Weird Al wouldn't help our image any. Really, it's the last thing we need right now, especially at this show."

In more recent years, Flansburgh has praised Yankovic's style parody "Everything You Know is Wrong," calling it "flattering" in 2011 on Twitter[2] and stating in 2014 on TMBG's Tumblr, "I heard it years back and it was fantastically accurate. Weird Al is the king of his genre."[3]