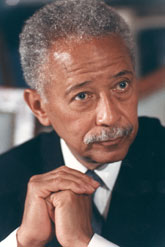 The former mayor eyed the CD cautiously. "It's got a nice beat to it," he said, "but I don't quite know what to make of any song called 'David Dinkins'." In a conference room at WLIB (where he does his own hour-long show) he listened to House of Mayors, a new solo project by John Linnell, one half of New York's wacky rock group They Might Be Giants. It's composed of 10 short, mostly instrumental songs, five of which are named for NYC mayors; the one called "David Dinkins" is a beboppish jazz piece featuring a weirdly tuned piano accompanied by voices, an organ, and a drum machine.

Linnell, on tour with his band and calling from a Marriott Hotel in Kansas City, cites his love for New York as a source of inspiration for the CD, having used an NYC encyclopedia to bone up on past mayors like Fernando Wood and John Purroy Mitchel. "I found out Wood was a real monster," he laughs. He admits the David Dinkins tune is "upbeat and a bit unsettling", but says he voted for him and claims no kind of advocacy in any of these tunes. His only criterion was to have a representative from as many different time periods in NYC history as possible. "I almost did one called 'Ed Koch'. He's such a colorful character," says Linnell. "But Dinkins won out."

Ever the politician, ex-mayor Dinkins never did say if he loved or hated the record; he did say, however, that he was flattered to have been selected. [...]

He smiled at the thought of what his own version of a song called "David Dinkins" would sound like, replying with a laugh, "I haven't the foggiest idea. I'm certainly not a musician, and I can't even carry a tune. My singing is awful."