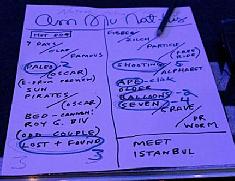 The day after The Egg show, I took my first independent MTA ride to CapitalQ's dorm in Stony Brook, so I could stay the night, then see this show the next day. We took the LIRR and the NYC Subways to get from Stony Brook, NY to the American Museum of Natural History in New York, NY, and we did not get lost at all. On the ride there, we ran into another family that was going to see the same show as us. As me and CappyQ walked out of the subway, we saw dinosaur drawings on the walls, Q remarked that they were drawn by John Linnell, and the kids behind us believed him. Hahaha.

The wait outside the museum was hectic, yet fun. We heard a rumor that all the tickets had been given out, even though it was around 9 AM, and the tickets weren't released until 10:15 AM. Time Magazine Online came around with a camera and interviewed many fans (mostly the children) about TMBG. I got a few seconds of fame, as did CapitalQ. Then the security guard asked everyone going to the concert to go to the lower level. About 300 people ran down to the bottom level (and I ran slow, while Q was running so fast I nearly lost him), where another worker asked the mob to go back up and get a ticket. Luckily, we both still got front row seats in the Ocean Hall, and we met up with MichelleMaBelle and TDK.

Also, we could not get tickets for both the 11AM and 2PM show. After we got into the Ocean Hall, CapitalQ came up with a genius plan that would've gotten us into both shows, but it couldn't happen since we already got our tickets.

Randomly, I heard Hot Dog! coming in through the speakers and I thought they were just playing random tracks. To my surprise, Marty Beller comes running out, and everyone got called up to the front. Me, Q, and Michelle, both sat down in the front, in front of a buncha little kids. I wish I could have stood up, but hey, the children probably see them less than I do.

TMBG was in pristine condition, every song was done with full energy and everyone gave it their all, except for Linnell, who forgot what to say during I Am A Paleontologist. That was humourous.

During Bed Bed Bed, one of my favorite kids songs, one of TMBG's crew members asked me and CapitalQ to stop filming. I thought it was one of the museum workers at first. He said something that like the museum has a no camera policy and he didn't want to see us get kicked out. Luckily, all the 50 other people with cameras didn't get kicked out, and we kept filming. Q later found out that the guy appreciated us filming, and he just didn't want to see us get removed from the show for filming.

After the entire show was over and there was 6,000,000 pieces of metallic confetti in the ground, Marty Beller and John Flansburgh and gave everybody free bumper stickers, and we were told that there were free cookies. I took this chance to get cookies, and a picture with Marty Beller (who just got out of retirement). We also couldn't get the setlists, since they needed it for the 2 PM show.

All in all, definitely the best kids show I've been too, really great times. If you saw me, black hair, glasses, yellow shirt, please, feel free to say hi! I love it when people do that.

I can't count myself as having attended, though I was in the museum while they were playing. My friend and I heard Older (we wondered why it sounded so muffled until we went to the 2:00 show) as we lingered in the Hall of Biodiversity and listened until one of the museum workers made us leave. Anyway, it sounded fantastic, and the bass was as cool as ever.

Come Monday, I was still shedding bits of mylar confetti from the morning show! Was in the third row when the air guns went off, and a truckload went down my shirt. Followed by several handfuls my nephew collected over the next 30 minutes. Great show, despite the museum's ridiculous mis-handling of the ticket situation. The bass really is Danny Weinkauf...

First off - sorry for everyone that got caught up in that mess of a ticket rush. I was volunteering and had the unenviable job of telling people "no, sorry, you have to have a museum ticket..." Anyhoo, everyone who wanted one, got one, and I don't think the last tickets were given out till about half an hour before the afternoon show started. And that wasn't Larry David on the line waiting for tickets, much to my disappointment.

But what a treat - TMBG where I work!!! Singing about Science (and other things!) I only wish that Mammal was on the setlist, as we have a pretty kick ass collection of mammals, and a whole special exhibit on them right now - Extreme Mammals.

Got to watch them at sound check, got to take a bunch of pictures from all over the room in places you all couldn't go ;-) - I linked to them above, please check them out! And, I tried to kick (not realizing it was him) Marty out of the room while we were cleaning up, only to have him tell me that he's in the band... Oops... But then we chatted for a few minutes. The sound guy got me a shirt signed by the two Johns, and I added Danny W to it later, and I got a copy of the setlist - it's at home now, but if I remember, I'll post it. A great day, even if I was at work on my day off!