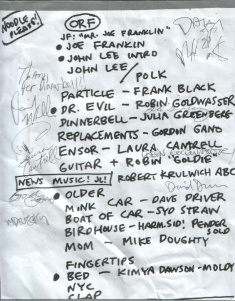 Oh. My. God. One of the best shows ever. Here is the run-down:

The show starts with Joe Franklin, talk show host on WWOR, talking about how much he admires these guys. Then they came out.

They started with John Lee Supertaster, right into James K. Polk. After this, the parade of guest stars began.

Particle Man: Begin with Frank Black of the Pixies singing a fun version of Particle Man.
Dr. Evil: Then go to Robin Goldwasser delivering her own Dr. Evil.
Dinner Bell Julia Greenburg joins her for a very good version of Dinner Bell, first time I've heard the song live!
Meet James Ensor: Then Laura Cantrell comes out and sings James Ensor. Different key, as Dan Miller and Flans both used capos (Capo 5 for those of you playing at home). Flansburgh mentions it is the first time he had EVER played with a capo, and didn't even know how to put it on correctly!
The Guitar: After this, Robin joins Laura on stage for what is perhaps the best version of The Guitar ever, with Robin and Laura singing the female backing vocals.
Boat Of Car: Syd Straw comes out and sings Boat of car, a VERY rarely performed song.
Birdhouse In Your Soul: She remains out on stage to sing Birdhouse with the Johns, no doubt a dream of hers. Mark Pender of the Max Weinberg 7 makes a guest appearance playing the trumpet solo of Birdhouse.

After this, Robert Krulwich of Nightline comes out with a proclamation from the city of Brooklyn proclaiming today as They Might Be Giants day. He had an official proclamation in his hand and read the entire proclamation to the audience. John & John were COMPLETELY beside themselves. Oh how special it was!

Mink Car: After performing Older, they bring out David Driver of People are Wrong! fame. He performs a WONDERFUL version of Mink Car, channeling Burt Bacharach.
Your Mom's Alright: After this, we get Mike Doughty, and he performed this song which he recorded the lead vocal for, as well as the "Something Grabbed A Hold Of My Hand" section of Fingertips.
Bed Bed Bed (Book version): Bring out Kimya Dawson of the ex-Moldy Peaches. She performed the NEW version of Bed Bed Bed, to be released by Simon & Schuster as part of a children's book. She was VERY nervous on stage, but sang the song well.

TMBG finishes up their main set with New York City and Clap Your Hands. Encores were Istanbul with Mark Pender once again tearing it up, followed by the Monkees Theme (No joke), and TMBG's version of A Day In The Life, Road Movie To Berlin.

The only thing that would have made the show better was to have ALL the special guests out on stage for one final number. Perhaps New York City or Birdhouse. It would have been a moment that would have brought down the house. But still, one of the best shows ever, easily. Thank you John & John and all involved for a truly special night.