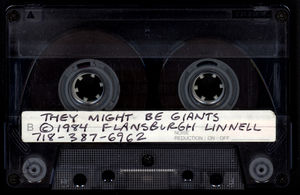 They Might Be Giants (4 song cassette)
Oddball humor has always been a staple of rock 'n' roll, even before Dr. Demento made his mark on the world. But few bands can pull it off like TMBG. Every one of these 4 songs is credible and fun. The cuts are short and comical, like the social commentary "Youth Culture Killed My Dog," and the c/w spoof (complete with tubas) entitled "#3." Before you can pluck down cash to see the band, you can check out their Dial-A-Song hotline - (212) 387-6962 - which promises a different tune every day.

Also allegedly released in 1984, but essentially debunked in 2013, was a rumored demo tape initially perpetuated by an email from a fan to Jonathan Chaffer of tmbg.org on January 6, 1996, prompting him to add the tape to the TMBG.org Discography which subsequently carried it over to TMBW:[1]

A friend of my called me the other day with some pretty cool news--she uncovered an old They Might Be Giants tape which I hadn't heard of and isn't on the archive. It's got a big pink and orange head on the cover and discretly says "They Might Be Giants" in the corner. There were five songs, if I remember correctly, and two of them were called Kitchen Door and Rules. I haven't heard it but several other sources have told me it is Theyesque. I was just wondering if anyone else had heard of this.

The tape was only rumored to exist and a copy from a fan never surfaced. As such, the tape was likely invented through the above story and passed along as a legend since. In 2013, John Flansburgh commented on the tape on the TMBG Are OK Tumblr: "Sounds fake. I don't recognize either as lyrics... but maybe they are fragments or made up after the fact. I guess I’d have to hear it or see a lyric. But yeah, seems fake."[2]