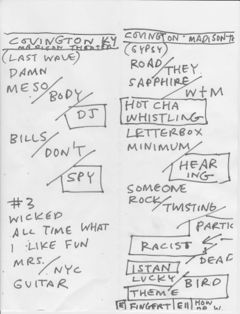 I made it here a couple of hours before the doors opened, and the best part of the line time was probably around soundcheck. So all of us superfans are just hanging out chatting, and we hear Flansburgh singing "The Microphone." Then, we get the alerts on our phone that a vibe report is happening, and we're all like, WTF? Lies! We were all ready to call Flansburgh out on this in the vibe, but someone looked inside (it was hard to see the darkened theater unless you had your face to the glass), and saw that "The Microphone" was a recording (presumably to test levels), and it looked like Flansburgh was talking to someone. None of us actually heard the substance of the vibe because we were doing our own expose of it all.Eventually, they actually started the soundcheck, which was mostly just checking to see that they could do some of the Flood songs they don't usually play.

We kept hanging out, chatting, and checking our phones for the time until it was 7pm. Just before then, some genius worker dumped out a pile of ice right in front of the door. Or, more accurately, he slung it, because a couple of pieces made it to my car (which was parked out front). It hadn't all melted by the time they were ready to open the doors, so they swept the remaining bits away.Surprisingly, there actually wasn't a pat down or metal detector, so getting in was pretty easy. They even checked IDs for the over 21s in line before letting us in, so that was great.

Since I was second in line, I got a spot center stage, which was actually quite nice, though the stage was pretty high (my guess would be 4.5 to 5 feet) , so my neck was a bit tired by the end of the show. Since this was my fourth show of this tour, I told everyone that I didn't expect them to get on stage until about 8:10pm, since they always seem to be a few minutes late. However, at promptly 8pm, the lights dimmed and they started the Last Wave video.Now, the Last Wave video is cool and all, and there were definitely a few chuckles for it, but at this point, it's whatever. They normally do it before the second set, before Quiet Storm, but with the Dloof set, they weren't able to do a proper QS mini-set, which I was actually fine with.For the show itself, this was as good as the rest of the shows that I've been to on this tour. I did miss "Let's Get This Over With," but they've been opening with that a lot lately, so I guess they wanted to switch things up.

Banter bits included: The confusion between Covington and Cincy (neighboring cities in the same metro), and how they hadn't been this confused since Tempe. They called out Covington (cheer) and then Cincy (just as loud of a cheer), and said that explained nothing, as apparently 1 2/3 of the people were here from the cities. Another bit was when Flansburgh put on his acoustic guitar for a song (I don't remember which), and got some really bad feedback. He said that his guitar had been touched by the hand of god, because when that happens, everyone goes, "Jesus!" I think those stories were both during set 1.

A couple of items in Set 2 (someone else posted these on youtube, someone who was maybe 5 feet to my left, to give you an idea of my vantage point):1) Flansburgh noted that going through Flood backwards was like they were time travelers, he felt like Benjamin Button, which he hasn't seen. JL said it was more like Memento for him. Then, Flansburgh started doing his impression of Boss Baby saying "I'm Benjamin Button" and smoking a stogie.2) About halfway through the second set, Flansburgh said that he was confused because there wasn't a place for on stage banter on the track list for Flood. JL then asked JF how his day had been, what he'd done, and Flansburgh said that he had finished one book (didn't catch the name - it was something political), and he had started reading Fascist by Madeline Albright, because he wanted to get into current events. Then he went on a tangent about how they play in a California bar called the Belly-Up, and the brother of that owner has a bar in Aspen, CO, who decided to book TMBG. Flansburgh said they thought, What? Aspen? TMBG? Huh? But it's a similar culture, beach bums, ski bums, so whatever. Anyway, at the Aspen show, Madeline Albright was in the VIP section, and he spent the entire show just thinking "Wha?" He also was confused by the snowboard, boogieboard thing, and said that he considered himself an outdoorsman (or maybe indoorsman), and said something about those kids smoking their LSD.

So, yeah, pretty good banter. As for the songs, Spy seemed especially good this time, and of course Flood is Flood, backwards or forwards. This was my third live Flood show, and although it's not as much of an OMG moment for me, I really do enjoy them. Even though it can be slightly annoying when the person behind you is singing every song loudly, and getting a handful of lyrics wrong, it still amuses me how much the crowd sings along to most of Flood. Curt is still as awesome as he's been for all of the shows, as of course was the rest of the band. Oh, and in a nice callback of sorts, it seems that the fadeout for "Hey, Mr. DJ" is here to stay, as they faded out once again when they played it. That was actually JL's intro. "This song has a fadeout," proceeds to start.After the show, since I actually had a place to stay fairly close by, so I waited around, got one of the stickers they were handing out, and eventually got a picture with Danny and Marty. Great show and fun venue!