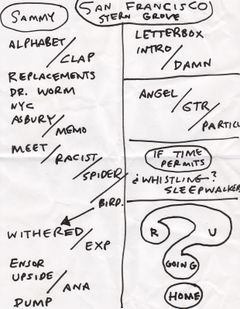 A beautiful day and a beautiful place. However, it was very crowded. There must have been 10,000 people there - it was free. There were many people (including me and my family) that had to sit on the hillside above the amphitheater with our views blocked by eucalyptus trees. Flans said "We've seen some shitty views in our day, but..." at one point. We walked around to get better views. A lot of people just came for a free show.

The band was great. I didn't know Dan Miller was so good. They should utilize him more - as if they were a jam band. Marty was on the left side biting his tongue while he played. Danny roamed around. Flans was very entertaining as emcee. Linnell kept quiet except for singing - he was font and center on his keys.

Wish they played The Cap'm and Climbing the Walls from the Else. Instead they played Upside Down Frown!?

Loved seeing how much love TMBG gets in SF -- one of the volunteers mentioned that this was the first time this season that the Grove might be closed to more attendees.

I only wish they had played more music from their children's albums as there were a ton of families (including ours) in attendance.

After seeing them at the Rio a couple days before I was expecting an awesome show of the same magnitude. And I was right. I got to the Grove super early (9 am) to get a good spot. It was beautiful outside! They showed up around 11 am and practiced "Experimental Film" and the beginning of "With the Dark." They were not seen until they actually performed for the thousands of people. There were so so many people ("Ewoks" as the Johns called them) but luckily since I got there early I was in the front row. Brought my foam finger from the Santa Cruz show. The audience I don't think was as enthused about their music and didn't reciprocate the band's energy back. Flansy joked about porn and the audience cheered. I love San Francisco. Got a setlist from a roadie's pocket. Again, unfortunately, it was a photocopy.

"When I say Ewok, you say EWOK!" - John Linnell