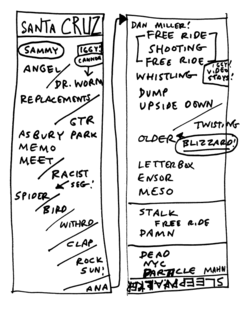 What an awesome show. It was my first TMBG concert and I wasn't dissapointed at all. She's An Angel was a great opener and got everyone really excited. They had some really funny dialogue, such as in the middle of Why Does The Sun Shine?:
JF: Scientists have found that the sun is a huge atom smashing machine! The heat and light of the sun come from the nuclear reactions between nitrogen, the constitution, Marty Beller, king of the drums! Why won't he show us his birth certificate? Where is his birth certificate? And you there *points to guy in the audience* the one with the beard, where's your birth certificate?
JL: I don't think he was even BORN!!
JF: Yeh! I think he was HATCHED!
It seemed like the concert was short, but maybe that's because I wanted them to stay there forever. They seemed like they were having a lot of fun, and their setlist was perfect. An awesome concert. --InsertUsernameHere 22:53, 22 August 2010 (UTC)

Oh man, TMBG delivered with this show. Before the show started a bunch of foam hands were thrown out to the audience. Opening with "She's an Angel" really shocked me, its one of my favorites. They had no opening band, and they really didn't need one. My friends and I were right up front. I don't know how well they can actually see the fans down below but it seemed like there was definite eye contact during songs. Their dialogue onstage was really funny. The energy from the crowd near the stage was fantastic. The "Particle Man" interlude was insane--literally. I loved it.
Stole the setlist from John Linnell's keyboard. Too bad it's a photocopy.

I brought my kids (ages 13, 11, and 8) to the concert and they absolutely loved it. Two of my kids tend to be a bit reticent, and throwing the foam hands into the crowd got them comfortable and involved before the show even started. It was fun to watch my 11-year-old get all excited when Withered Hope was played--it's one of her favorites.
As always with a TMBG concert, the music was outstanding and the Johns' senses of humor were on full display. The Avatars Of They are classic.
For $25 per ticket at such a small venue, it is hard to imagine a better entertainment deal.

Griffin Here are a lot of great photos of the santa cruz show and the stern grove festival, enjoy! http://picasaweb.google.com/MyCatKilledMe/Tmbg?authkey=Gv1sRgCPP-1oP3tf2-Fw#