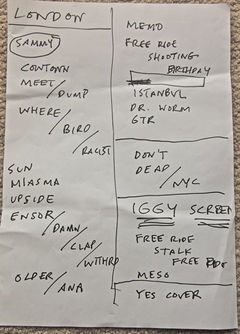 A helium-filled penguin and jellyfish were flying around inside the auditorium from when people were let in to just before Mike Doughty's set.

Phill Jupitus and Tim Minchin were in attendance, Row 3. (I sat in front of them)

Just a non-member chiming in here before some Wikian gives an official write-up.
It was my first TMBG show, being the first time they've come to the UK in however many years, and we were psyched beforehand. We arrived pretty early, so after we'd bought some T-shirts (they were retailing "Science is Real" Ts to tie in with Here Comes Science and an "8-bit rock" motif with what looks like a Space Invader, which was new to me), we had some time to glance at the science exhibition that was happening on the ground floor. A nice PhD student from Cambridge came and talked to us enthusiastically about algae, which wasn't exactly the sort of thing I'd expect to see before a rock show, but interesting anyway. And we made off with the last of the cuddly algae toys they were handing out, so it's all good.

The jellyfish and penguin (we argued over whether it was a penguin, manatee or a dolphin - Mike Doughty seemed to think the latter) were really cool and fun to watch while we waited.
Mike played a pretty good set, I wasn't really familiar with his stuff but he worked the crowd really well. He commented once or twice on how reticent and quiet we were during the songs, saying "I'd expected you to be drunker". The audience misjudged the lengths of the songs a couple of times in a row and started clapping right before the end, which Mike played off pretty well. Very entertaining!

Was very surprised and excited to see Cowtown as an opener, the song kicks ass live. Meet the Elements was damn good too, really high-energy. It was nice to hear a few songs I wasn't too familiar with - I hadn't really heard the other contributions from Here Comes Science, so that was nice. An excellent performance of Where Your Eyes Don't Go as well, with Stan Harrison ("the best-dressed member of They Might Be Giants", according to Flans) rocking the sax.

Birdhouse was a euphoric number, with a number of people getting up and jumping about to the chorus, and everybody singing along.

The Johns took a vote on whether to do WDTSS as Katharine Hepburn, Walter Brennan or James Mason. Mason won but they admitted they would have done Mason regardless of the outcome ("this isn't really a democracy"). The suggestion of the pirate voices spawned a number of enthusiastic "Arrrrrrr!"s from the audience. Flans: "Either these are sycophants, or we have a number of actual pirates in the audience." Linnell's James Mason voice was hilarious, and the nuclear reagents were "Katharine Hepburn, Walter Brennan.... and me!"

The Johns were quick to point out that the song was actually incorrect, and feigned annoyance that nobody had bothered to point this out to them in the 15 years they'd been performing it. They cleared it up with a very jolly rendition of WDTSRS which got a lot of laughs.

The puppets were straight out of left field for me, completely bizarre but entertaining. They claimed to have had a scene in Avatar, right at the end after the credits, which nobody saw because everyone left the cinema too early. Their rendition of What Is A Shooting Star was a hoot, anyway.

I'd been hoping they'd play The Guitar, and I wasn't disappointed - a cracking performance, with solos from everybody in the band and the whole audience dancing.

Don't Let's Start, Dead and NYC made for a terrific, high-energy encore. The second encore saw the puppets doing an impromptu "song" (before Stalk of Wheat) making fun of internet slang: Flans' puppet said "for the win" and Linnell's responded with "fail".

I hadn't expected a third encore, but everybody was still up and applauding, so they came back on to do one more song. Undoubtedly the best version of Particle Man I've ever seen or heard, a triumph. We'd have gladly welcomed them back for a fourth, fifth and sixth encore, but they were done.

We hung around for a bit with a small crowd of fans by the artists' entrance. For all I know the patience of those who remained was rewarded, but we had to go after ten minutes or so to get the last train home.

I've been to about 15 shows in the U.S. and I have to say only one or two shows I had seen before had a higher energy level than this one. Much less chatting than normal but they were clearly having fun and put on an excellent show. I don't see how that thing floating around before the show could have been anything other than a whale. It looked precisely like a whale, moved like a whale. Whale is my vote. But I heard a lot of other opinions (but dolphins have dorsal fins, penguins have feet, this had neither). The opening act was surprising good for a TMBG show, albeit hilariously redundant. I wouldn't buy the album, but he put on a good show.

All in all, this was one of my favorite tmbg shows ever. I would have liked a better/longer set list, but both their energy level and the crowd's energy level were high. It was interesting (as an American) to see what songs the Brits got excited about. The band mentioned Lincoln and I was shocked by the lack of crazed screaming. They loved Birdhouse, obviously, but definitely different preferences. And I would be remiss if I didn't mention the insane power of the confetti cannon. It was ridiculous compared to the American counterparts. It was continuously firing a stream of confetti for a solid 20 seconds. It was more like a confetti Gatling gun. It was crazy and awesome. Crazy awesome. They must make them differently here.

Sorry it's brief, but just know I strongly suggest some of you die hard Americans take an opportunity to see them play in a country they rarely visit. The crowd was great.

Another non-wikian confirming that this was a terrific show. My first TMBG show, i've been waiting years, and it really showed how much the band the the audience relished the rare opportunity to see the Johns play England.

The first section of the set was great, performance-wise but the whole thing got kicked up a notch before Clap Your Hands / Withered Hope when Marty busted loose with a furious whirlwind of drumming and Flans instructed the audience to abandon the seating arrangements, which prompted a rush to the front of the auditorium, en masse in a flurry of dancing.

It's all a blur. A big, happy blur. We had to rush to catch the last train out of London afterwards, and I didn't mind at all. Three encores! Three encores! And while they were going through all the fan favourites, they played my favourite song! (Ana Ng is not a rarity, admittedly, but it was my first time hearing it properly live...) Things started off mostly seated, like the kid show earlier, but people really woke up on hearing the Birdhouse opening, and then we were all called to the front for the TMBG national anthem and sitting down again was unthinkable. For someone who hardly knows any other fans IRL, there's no feeling quite like being in the middle of a crowd who all know when to clap, when to dance and when to sing along.

A fair bit of the setlist was repeated from the afternoon show, but everybody present felt more energetic by an order of magnitude, even the drunks (or even the not-drunks, if you look at it a different way). For me, one thing in particular that stuck out was the Istanbul clarinet solo - I thought the kid show solo was very cool, but this one had so much flourish that it was clear even the rest of the band didn't know when it would end. They needed a cue to start playing.
The penguin/whale/shark/dolphin/manatee and jellyfish/octopus also returned while we were waiting for the opening act, but didn't stick around.

If the blond guy who let me cut in between him and his friend into the second row from the stage partway through The Guitar reads the wiki: hello, cheers, and I'm sorry about accidentally nicking your seat before TMBG came on.

Quite possibly the best introduction to Clap Your Hands I've ever experienced:
Flans: "Ladies and gentlemen this is where the show's gonna change. Iggy can you turn the house lights on please? Iggy can you turn the house lights up please? Ladies and gentlemen we are They Might Be Giants from Brooklyn New York and we enjoy all kinds of shows. We enjoy playing in night clubs, we enjoy playing in theaters. But most of all, we enjoy playing to active, participating crowds. Everybody please rise for They Might Be Giants' national anthem. If you want a better seat, we're here to super-size you. Come on down into the isles, people! Everybody come on down into the isles! Fuck this whole sitting down SHIT! Who gives a shit about that?! Let's have a good time, for the first time in our FUCKING LIVES! Everybody in the back, come to the front! Everybody in the front, get closer to your friends! COME ON! Who needs to sit down?! Fuck that shit! Come on people, what kind of pussy show is this?! I'm 50 years old! I'm through messing around here, people. We're here bringing the ROCK SHIT. Yeah rock your lazy ass and have a good time! Everybody in the back, I still see some room up here! People up there, I still see some room up there! Ladies and gentlemen introducing the man who would not show us his birth certificate, on the drums, Mr. Marty Beller!"