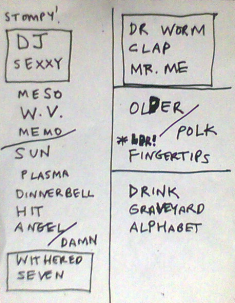 WOW. This was my third TMBG show, and the best. This time I showed up, got RIGHT to the front of the club (with my yellow foam hand given out in '06), and remained right in front of Flans.
It was HUGE. Flood was lovingly re-worked with a full band and horn section, and afterwards they played an insane second set with all kinds of songs I never expected to hear. (This is the third show I've seen, and I have still never heard Ana Ng... and I don't care.) A high point was West Virginia; I freaked out when I heard Linnell play the keyboard intro. A State Songs track live... it couldn't have been REAL. But it was. After shouting "I LOVE STATE SONGS", I half-jokingly (not because I didn't want to hear the song, but because I didn't expect him to play it) yelled "UNSUPERVISED!". Incredibly, just a few songs later, they ripped into an incredible version of "Unsupervised, I Hit My Head".
This was an amazing show, and to top it all off I got a setlist (I believe it's Flans', judging by how he made note of mentioning the La Possion Rouge show between sets).
Here's a scan of it. "Stompy" is an intro tape played before DJ, "LPR!" is a reminder to Flans from himself to mention the show the next day, and note that "Memo To Human Resources" was slated before "The Sun Is A Mass" but was cut at the last second.

Eeeeey! It's the foam finger guy! I was going to ask where you got it, but I was so mesmerized I completely forgot about asking. The 2006 D.C. show was the one I was going to go to two whole years ago but the tickets were sold out by the time I found out about it! AND THANKS FOR POSTING THAT SETLIST. I wanted one so bad but I wasn't close enough. I'm pretty sure Linnell looked in my general direction; or like.. his eyeballs were facing my way. I also didn't faint at that, which is a surprise.
'Twas my first show, and an awesome one at that. The fan diversity couldn't have been any better; Little 14 year olds standing next to 40 somethings singing the songs together; that's the magic of the Giants for you.
Also, Linnell had 'ol "Main Squeeze" for this show. One of the keys broke off during the performance of Flood. Linnell responded with a "I think I'll put this in a special place," and placed it on the keyboard that was set up. Does anyone know what happened to that Accordion key? No one saw them pick it up or put it anywhere else. These two chicks next to me were freaaakiing out over it. It was kind of scary. :/ --06:31, 30 November 2008 (UTC)

Your Half, you must have been next to the "two chicks" behind me that were shrieking about the key. I was standing directly in front of the keyboard, and me and two new friends were ready to fight to the death to defend that key. Main Squeeze must be repaired! I never saw Mr. Linnell take the key, but no one reached over me to grab it, either.
This was my second show, and I had a blast. I was so sad that cameras were not allowed because I could have taken some amazing shots. I also got some of the aforementioned John-Linnell-Eye-Contact-Plus-Smile, which might be worth the price of admission by itself. Everyone was wonderfully friendly. I'm not one for large crowds or loud noise, but I never felt smothered there. I think TMBG have the best fans. :-) --07:51, 30 November 2008