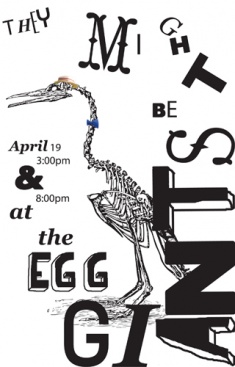 First time in over 7 shows I have attended that they played "Don't Let's Start" so a great show no matter what else happened! Actually it is listed as played in at The Chance in Poughkeepsie in 1997, and I might have been there... oh well. The Egg was a little less than 1/2 full, so about 350 people I would estimate. Most stood with only one encouragement from John F. at the very beginning. Much in between song banter about what movies the songs "could" have been from, probably a great discussion topic here if not already tackled! Many "kids" songs for the "adult" show I thought and since my only exposure to those is from concerts as I don't own the kids CDs that was surprising (although most in the audience seemed to enjoy them more than stuff from the 80's or "The Else"). Probably would not be surprising if I looked at the previous "adult" show setlists.

"Drink!" is weird participating in when you are not allowed to bring drinks into the theatre (John F. did note earlier that the Egg "needed to push the booze more"). Best show in Albany in awhile as the previous two have been free shows with many people who had no idea who the band was. It was wierd though we were standing right in front of the stage next to two guys who did not seem to know (or like) much about the band (I could have used their $50 the tickets cost (2x$25) for beer).
Setlist was very similiar to the most recent shows with the exception of "Albany" in the second encore. I will place a tentative setlist although we did not get a setlist when the crew was passing them out after the show as my wife said "let the younger women get them" whatever that means.