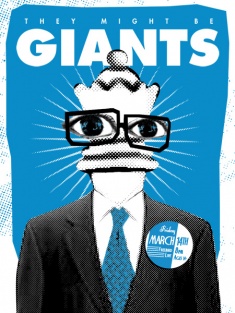 Ok ok, I know this is going to be WAY too long, but here is everything I can remember:

Yeah, so this show was basically amazing. Freebird live is a very small venue. The floor holds 200 people, if that. And there's also a balcony. Anyway, so I went to this show with three other friends. We got to Freebird at about 6:00. While we were waiting, we saw Flans, Miller, Weinkauf, and Vilardi all walk out on to the sidewalk. So my friend James and I, ever so non-stalkishly, walked behind them. They turned into some restaurant that I can't remember the name of... So we turned back around. On our way back, we saw Linnell riding his bike in the direction of the restaurant. We tried waving, but he was on his cell phone and didn't pay us any attention. So we waited outside for about another hour and met TDK and Moofy. They were pretty awesome. Finally, after getting marked with huge black "X"s on our hands and getting a green TMBG foam finger, the doors opened. The four of us and TDK and Moofy all got to the front of the stage (which was about 10 feet in length - again, very small venue) and were surprised to see Weinkauf standing there as well. He said he was just observing from the audience perspective or something. Anyway, so we wait about another 10 minutes and The Posmarks walked on stage. They were pretty good. Except the lead singer definitely could have had a lot more enthusiasm. She wasn't very excited at all. Except for the last song, which she started jumping around like crazy. So after their set, the TMBG crew comes out and sets everything up. After meeting a couple of other people, such as Tim and Lydia (sorry if you didn't want me to use your actual name), the lights dimmed and the Stompy Intro begins playing. They all walk out, with I think Vilardi at the lead. They start off almost immediately into Why Does The Sun Shine? Flans used the "estrogen, estrogen, estrogen, and more estrogen!" insert. Then off into Clap Your Hands, which had quite a bit of energy. Then Alphabet of Nations, with Miller on keyboard. Then there was some banter, which I can't quite remember. If anyone remembers some specific banter, please fill it in. Next was a trio of Upside Down Frown, Hey Mr. DJ, and New York City, all of which I haven't heard live. Some more banter, and then on into the very well-received Ana Ng. Flans commented that he was feeling a little better, but "still completely high". Which was the appropriate thing to say right before playing Apartment Four. After I'm Impressed, everyone but the two Johns left the stage. They proceeded to play Maybe I Know, which Flansburgh messed up on within the first 20 seconds. He said something like "we've been playing this song for 25 years, you think we'd know it by now." So they started over and nailed it. Then my personal favorite live combo of all time - Puppet Head and Birthday. Asbury Park, Experimental Film, and Twisting were all good as well. Then Particle Man (misspelled "Partice" on their setlist) which had the "I Love To Sing" bridge. Very entertaining. They went straight into The Famous Polka, which Flansburgh had some noticable trouble on in the beginning. After, Linnell said "This is our favorite song to perform live", and they played Doctor Worm. They thanked everybody and walked off. Of course, we all knew it wasn't over there. They all came back and Flans said "after 25 years, we've noticed that there are two things people enjoy in a song. Two squiggly synthisizers, and monkeys." He then introduced Linnell as DJ What-not and Miller as MC Back-the-fuck-up. Which again, was appropriate right before a children's song. After One Dozen Monkeys, Flansburgh started talking about their The Else vinyl. My friend Zach (Hotelmesopotamia) had brought his Hotel California vinyl to be signed. He wanted to bring the most random yet legitiamte thing for them to sign. So as Flans is talking about their vinyl, Zach holds up Hotel California. The look at it and Flans says "Yeah, the new record is called The Else. It's much better than our last album Hotel California." Flans reached out for it, and Zach handed Hotel California to him. So he starts looking through it and talking about it, etc. Then all of a sudden, the band starts to PLAY Hotel California. Completely amazing. We were joking about that happening before the show but had no idea that would ACTUALLY happen. So they play The Mesopotamians, go off stage, and come out for another encore. How Can I Sing Like A Girl? was amazing. They then introduced Frank Vilardi and Miller starts to play his intro to Istanbul. It lasted a good 4 or 5 minutes. Then they play for another 6 or 7 minutes. It was, again, amazing. So they leave for the final time, and the lights come back up. We stuck around and between the four of us, we got three setlists. I also ended up getting one of Vilardi's drumsticks. Which is perfect, because I got one of Marty's at the last show I went to in Atlanta. We then went outside and went over to the tour bus. Eventually, we flag down Weinkauf with Hotel California. So he came over and signed Hotel California -- not as Danny Weinkauf, but as Don Henley and Joe Walsh (two members of The Eagles). So I get him to sign my shoe and some other stuff, and he gets on the bus. Then Dan Miller got off the bus holding what looked like a bag of laundry. We called him over and got him to sign some stuff as well. We saw Linnell get on and off the bus a couple of times, but he never comes over to the fans. Unless you're like at a kids show. Oh well... One day... All in all, it was quite an amazing and personal show. I have some pictures up. I'll post a link.