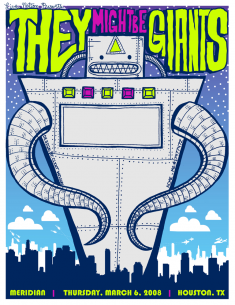 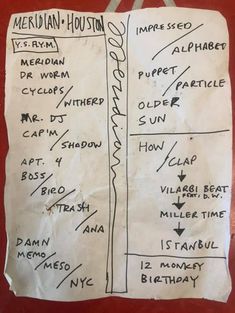 Setlist: (Possibly out of order) 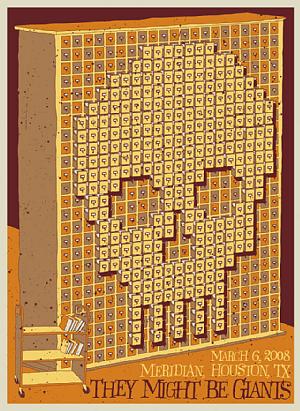 A poster promoting the show

Flans: "Frank stepped in and learned our entire show — not 40 songs, not 50 songs, 60 songs. And he did it without complaining so I'm going to do it for him."

"I used to think the audience was going 'woo' for the song, but I just realized they've been going 'woah' for the lights."

Linnell {singing}: "Somebody stole my setlist."

While Oppenheimer was on I kept finding myself saying "I liked that even though I had no idea what he was saying". Near the end of their set: "Someone just heckled me Phil Collins. (sarcastically) I've never gotten Moby or Phil Collins before." Someone else yelled out Peter Gabriel's name and at that point there was pretty much a game of oneupmanship going on in the crowd.

TMBG were great. No — they were awesome! They opened the show with Meridian's Venue Song and proceeded to screw it up. A few songs later they insisted they'd play it again until they got it right and nailed it in one try. Linnell sang one of the verses of Particle Man staccato, which I thought was a nice touch. Boss of Me was the short thirty second version which I didn't know they played live. As this was the first show of theirs I've seen I have nothing to compare it to, but I hope I get to see them live again.

Flans pulled out a clipboard during Why Does The Sun Shine? and read "The heat and light of the sun come from the nuclear reactions of Nay-Thans, Brandons, Decepticons, and Estrogen(?)." I'm not sure about the last one, but I was close enough to read that he spelled the first one "Nay-Thans". Also at one point Linnell went to talk into a microphone that happened to be turned off, then he went over to another mic and explained that the first mic was his "Secret Mic" that he tells all of his secrets to.

I think he said "Nay-Thans, Ramekins, Decipticons, and Estrogen". From Podcast 27A: "far from the meddlesome influence of Decepticons, Ramekins, and Nay-thans." And I think Estrogen is a running joke in that song.