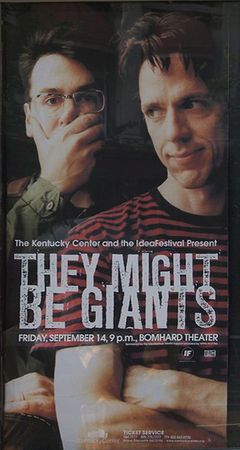 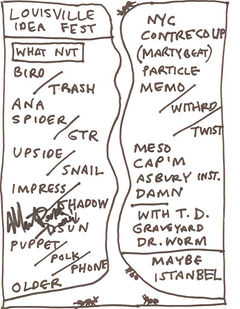 They Might Be Giants
Kentucky Center for the Arts in Louisville, KY
September 14, 2007 at 9:00 PM

So this "Idea Fest" show took place in this fancy little theater on top of another theater which was hosting a ballet at the same time. My buddy and I had driven the 10 hour drive from the previous night's venue to this one in an attempt to understand how touring felt. The theater was set up with stadium style seating, and several tables in front of the stage on the floor. My seat was way back in row N, whilst my friend had gotten one of the table seats up front. Ditching the opportunity to chat with the cute TMBG-loving boys seated next to me, I went to hang out with her up front, and luckily no one made me move, when the show started Flans immediately had everyone on their feet and at the stage. We were front and center. That was great. No opening band though, no Oppenheimer, I missed those two Irish guys greatly.

The band was in good form, Linnell oddly appearing more thrilled to be there than even Flans. The banter was great, the music was rocking, and the crowd (which had a really impressive variety of young and old fans) seemed extremely excited. Phone Calls from the Dead premiered the new slide show Flans cooked up, pictures of index card cut-out gravestones and telephones on a carpeted background, Flans had a little remote to shuffle through them during the theme song and then vanished backstage to help make the connection to beyond the grave, and soon Linnell had reached (not Eleanor Roosevelt!) the 12th President Zachary Taylor , who was drunk, and had a nice chat with him about partying and no one liking the 11th president, James K. Polk. Afterwards Flans and Linnell exchanged an inside joke with each other about skeletons getting drunk, the audience stood there baffled while they giggled at each other. Oh, silly Johns. The slide show was used again for comedic effect during "Older".

Other highlights included upon reentering the stage for the first encore, Flans brought up the Scuba Diving song that was improvised at the previous show after screwing up "Maybe I Know". Linnell played a tidbit of it, Flans expressed embarrassment, I yelled out that it was really good, and both of them reiterated this to the crowd. Scuba Diving music rules. "Istanbul" was written as "Istanbel" on the setlist. Little ants have been drawn all over the setlist. Dan Miller's "Istandbul" intro gets better every single time. The new roadie gives out Marty's drumsticks, and as he is a drumming machine man, they look awesomely destroyed at the end of the show. Sadly I did not acquire them and no one has been nice enough to share one with me yet.

Flans encouraged the audience to attend more shows, call their friends and get them to go to more shows, and if you were going to every show, give them your name so they could turn you in to the FBI. Ouch. Remind me to go to less TMBG shows. --HeyErikLeafinson 16:12, 17 September 2007 (UTC)