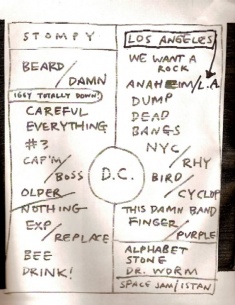 Lots of fun, lots of old songs. An odd selection, I guess, but they definitely rehearsed well for this one. Let's hope on the next tour they relearn a new set of really old songs, too. I really liked the new songs, too. There were a couple that I found especially good. If only I knew what they were called...

This is the first concert I'd been to since Paul McCartney, at the massive MCI Center last October. Of course the smaller venue's sound quality sound less awful and more like music, and I could see the band without the help of a screen the size of my house.
It was a rather tough route there, taking the subway down to the rather nasty neighborhood the 9:30 was in. (There was a drive-by shooting an hour after I left, right in front of the venue.)
The whole place was full of cigarette smoke so thick one could cut it with a knife. I couldn't even sit in the balconies due to the smoke, so I relocated to a standing position in front of the soundboard. (There was also significant amounts of alchohol at the venue, which of course I stayed away from.)
There was a lot of waiting, in which I bought a copy of Venue Songs signed by the two Johsn. Finally, Michael Leviton came onstage and played a his set. It was good enough for me to buy his album; and later, when waiting for the band to appear, I had the luck of seeing Leviton and the one backup musician he'd brought with him; the glockenspiel player and vocalist whose name I can't remember. (I can't read her autograph; yes, they both signed my copy of his album!)
Finally, there was a series of flashing white strobelights and the sound of very loud drumbeats; and then the sound of "Why Did You Grow A Beard" shook the venue at astonishing volume.
The set was amazing. I can honestly say I didn't miss the more famous essentials (Particle Man, Why Does The Sun Shine) in favor of the new (amazing) songs and some of the old goodies. I still don't like Bangs and Cyclops Rock, though.
Drink! has changed; instead of the usual required chanting of "Drink, Drink!" during the chorus, Flansburgh claimed the song was now an "imaginary intervention with about a thousant people"; and the crowd was asked to shout "No, wait!" instead.
Shortly before Los Angeles, Flansburgh claimed the Venue Songs they were about to play were not in fact to promote the DVD; and, in his words, "that's what the man wants us to think we're doing." Then, to even more laughter, he explains; "because the man is the DECIDER." (This is a reference to George W. Bush)
The show was incredibly loud and the bass guitar was shaking the floor under me. The performances, especially of the earlier pieces, were powerful and rocky; as was Damn Good Times. Sadly, I had to leave right after Cyclops Rock to get the last subway home. I don't want to live Token Back To Brooklyn in real life.
(Also; when I was leaving, I heard a piano intro that was definitely not the start of Fingertips. I think it might have been the start of Mink Car, but it certainly was nothing like Everything Is Catching On Fire.)
In conclusion, this was one of the greatest moments of my life. I also came home with a signed Venue Songs DVD/CD set, two foam hands, and a signed Leviton album.

This was the first time I've had a chance to see TMBG, so I don't have any basis for comparison, but I though it was a great show.
Unfortunately, they don't do many shows in the midwest, so I was wicked stoked to see their 9:30 date was while I was in DC.
Yay!