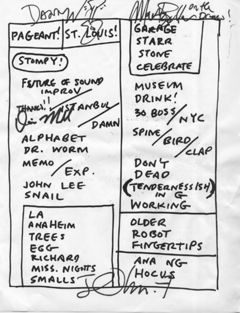 A few notes. One of Flans's guitar strings broke during Damn Good Times and the tech switched it out during the solo. The confetti cannon was fired during Doctor Worm but most of the confetti ended up on the stage. Later Flans used one of the fans on stage to blow a large amount off his pedels and into the crowd.

The Pageant is one pro Venue. My hats off to the owner and promoter, a smoother gig could not be imagined. Great Venue, great crowd, and a great show (almost, more in a minute). A pretty straight-ahead set that's performed well in a room that records well. The tape sounds very good.

We're using different audience mics this time round. Instead of being at FOH they are at the side of the stage. My thinking was that this would give a more 'live' feel to the recordings, as some of the previous ones sound a bit clinical to my ear.

The new mics have brought a more immediate feeling to the shows, but at a price. You can hear the comments, very clearly, from people standing around them. Some of these are hilarious and I may put together a "Best Of Overheard Fan Comments". There are few stingers in this one, but I don't want to spoil the surprise.

So, "Museum of Idiots" has been cut from this show. Personal Pride, and the vestige of professionalism dictate that this version had to go. I did not include another version from a different night, but I'll post a different version on the web site for all who want it.