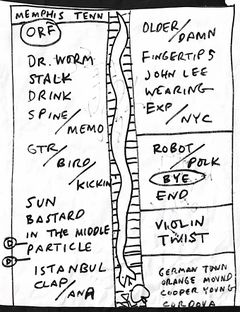 So we found this one while digging around the old hard drive and decided to put it out there. Another in the series of cool club dates by the boys. Nice clean sound and an extra long set. There are no edits in this one - I think from now on I'll mention anything that gets cut. The computer did it's own critique by creating a one second of digital noise during Dr. Worm. I mention this only in terms of full disclosure - the show is good timey rockin' fun with some classic talkies by John and John.

The show has an odd rollout with Orf welcoming the Johns for the Gibson Lounge theme and then another intro as the band hits the stage. For those who were there - what's the deal with the moat surrounded by a leg breaking ledge around the stage? Outside of having pirate wars during the show I can see no use for it. This gig was a personal thrill as we got to take a private Gibson Factory tour, my thanks to all.