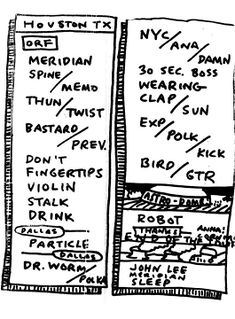 This page used to just have the setlist I put up, but I see it has been deleted, so I will give a quick review:

This was my 3rd time seeing TMBG, second in Houston, in the brand new venue The Meridian. I was a nicely laid out place, casual with a low ceiling and good lights. TMBG were in good form, it was late enough into tour that they had settled into a groove but still early enough that they were excited about playing the new songs. The venue tune, I'm sure most of you have heard it, is a catchy punkish enigma that was well-enjoyed by the crowd and apparantly by TMBG, as they played it no less than 3 times during the set. Flans remarked at how the ceiling of the venue, done in open warehouse style, looked as if a giant car was passing over the concert area.

The set was pretty standard fare for the early leg of the tour. Bastard was a nice highlight, and they leaned heavily on the children's album No! for the set. At one point, a random audience member handed me a sculpted skull and instructed me to give it to Flansy and tell him to play Turn Around. Alas, Flansy was in a long rant and I could not get his attention. Danny noticed, however, and I gave him the skull and told him the request, but it went unheeded.

I remember (the show being over a year ago now) Flans making the spotlight guys point the spotlights on each other. Corn Mo opened, and for a few moments during his set's climax I was almost positive that he was going to commit suicide right onstage. That's all I feel like writing.