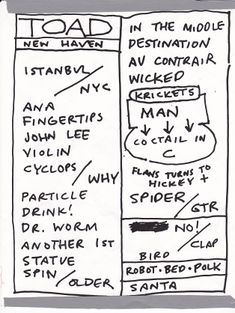 Review by Stuart Johnson:
This was a very good show with the band sounding great, notwithstanding the typical problems with Toad's PA. The crowd was appreciative, but didn't appear to know every word of every song as has been the case at previous shows I've seen at Toad's. Highlights were Dr. Worm, Birdhouse (complete with body surfing), and The Guitar. It was the first time I'd seen Statue and that was great, too.

Another highlight was Dan Miller. If John Flansburgh has allowed some of us latent guitarists/song writers to harbor the insane notion that, if we'd just worked hard enough, maybe we too could have been rock stars, Dan Miller completely destroys that notion with his virtuosity. Miller showed off a little with an acoustic intro to Istanbul, which opened the show. Flansburgh drew out the ending of Istanbul by playing power chord after power chord after power chord, jumping and windmilling, after which he yelled something like "Thank you New Haven. Good Night." Very funny. In fact, there was plenty of humorous banter between the Johns.

One other thing. I watched part of this show with someone I know from work who was there with her husband and little boy, who looked to be about 6 or 7. They were in the "skybox" out of the fray. The kid was obviously tired (it was a late show), but when Linnell began "Violin" the kid perked right up, smiled ear to ear, and he and his Mom sang the song together, which was really nice to see.

Review by Richard E. Green:
It was a theme show... kind of. It was "backwards night" where they wrote out a setlist, but read it from the down up. So instead of a walk on song, Miller just came on stage alone at the very beginning and started playing the intro to Istanbul - and then Istanbul had it's really long jam, and then Flans said "thank you goodnight" and they all left the stage -- but returned before anyone could start demanding refunds. Most of the setlist was reversed, where songs you'd except at the beginning were held off until the end and vice versa, and then when the show really ended, they played Wake Up Call.

Oh, and they had a hard time following the setlist backwards. A bunch of times they got confused about what song was next, and Flans went into Spider right before The Guitar instead of after it (which is a typical 2 song combo anyway).