From This Might Be A Wiki
(Redirected from Kimya Dawson) 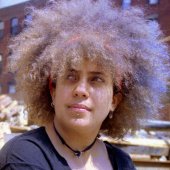 The Moldy Peaches, fronted by Adam Green and Kimya Dawson, were a New York anti-folk band that played fun and demented lo-fi music. They opened for They Might Be Giants at the 20th anniversary show in Central Park. In 2003, Kimya provided vocals for the soporifically gentle version of "Bed Bed Bed" for Bed, Bed, Bed.

The band as we know it has been on hiatus as of early 2004. Green and Dawson have gone on to pursue solo careers since 2002, but they have played Moldy Peaches songs together on a few occasions since.