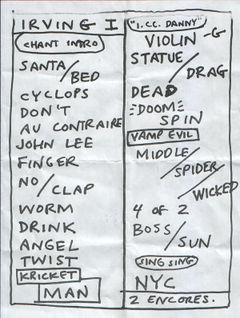 Review by John Ryan:
Flansburgh had to suffer through a bruised rib from coughing so much, as he was battling the flu!

Particle Man - Had the floor clapping on 2 & 4, balcony clapping on 1 & 3. Great effect and gave the song new life.

Statue Got Me High!!!!! - Hasn't been played in NY since 1996. And the first time I've heard it live in 43 shows. Sounded amazing, I love the guys for finally bringing this great song back to the set list.

On The Drag - A couple of false starts on this.

Violin - A special treat :) The song went on, and on, and on. Linnell didn't want it to end, it made him sad that it had to.

Spin The Dial - Lots of little blurbs, but the three stand-outs were Stone Temple Pilot's Plush, Michael Jackson's Off The Wall, and Ozzy Osborne's Crazy Train.

The band is just especially tight, and Flansburgh seems to be on a mission to prove anyone wrong who might have said they were resting on their laurels (Like myself.) They are on fire right now, and the flame won't be going out anytime soon. Keep it up guys!