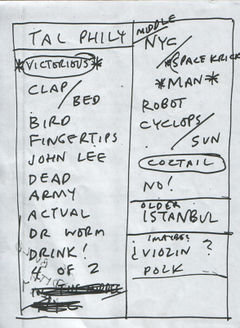 Review by TDK:
Free Ride - Arthur Bradford recited his story entitled 'Mollusks' while playing acoustic guitar. At one point TMBG played a bit of 'Free Ride' by Edgar Winter Group, which was part of his story. Also, as he neared the end of the story the band joined in and rocked out while Arthur smashed his guitar to bits on the stage.

Au Contraire - Dave Eggers said that this song had been played once before, the previous night in DC. How it belongs in the McSweeney's show, I'm not sure.

Dave Eggers then came back out and read a story which was published by McSweeney's. I cannot recall the title or author, but it was about Estonia and Junior High. Various songs were incorperated into the story, which TMBG performed little bits of: Up Where We Belong - By Joe Cocker. We Built This City - By Starship. True - By Spandau Ballet. Stairway To Heaven - By Led Zeppelin, played solo by Dan Miller.

blues guitar - Miller also accompanied Eddy Joe Cotton's story about life as a hobo on the great American railways. It was very blues-sounding.

We Are the World - TMBG closed the set with this classic, after Dave Eggers said his thank yous and described the charities that Mcsweeney's supports.

The Army's Tired Now - This seems to belong in the previous set, maybe They mixed it up with Au Contraire. Featuring Dan Miller on sleigh bells.

Free Ride - This song was briefly reprised, to demonstrate the fact that They were only playing one Edgar Winter Group song that night when a couple guys were shouting for 'Frankenstein'.

In the Middle - Sung by Flansburgh.

Spin the Dial - TMBG had a go at the following songs, as well as one I cannot recall: Jeremy - By Pearl Jam. Dancing in the Moonlight - By Harvest Moon. Aerials - By System of a Down.

Even though we were promised a full set, a total of eight songs written on the setlist were not played, cutting the set down to just over an hour. Man, It's So Loud In Here, Robot Parade, Why Does the Sun Shine? and No! were all cut from the main set. Istanbul (Not Constantinople) wad replaced by Cyclops Rock in the encore (which was originally in the main set). Finally, the second encore of Maybe I Know, Violin and James K. Polk was eliminated as well. Although the show could have been longer, I had a great time.