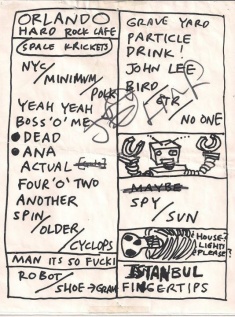 They Might Be Giants returned a year and a day after their last show at Hard Rock Live and made sure everyone had a wacky, good time. Fans were thrilled to be able to sing along with lots of new material from their latest album, Mink Car, such as "Another First Kiss," "Cyclops Rock," and "Yeh! Yeh!"

Giving a performance artist feel to the set, TMBG featured a drum solo early on that was sure to make anyone smile. John Flansburgh led the audience as drummer Dan Hickey played a medley of famous drum solos. He started by shouting, "for the legendary Gene Krupa, press or say 'one'," and the crowd would shout "one!" Led Zeppelin's John Bonham, the Rolling Stones' Charlie Watts, the Who's Keith Moon, and even Animal from the Muppets were included in the wide array of drum solos.

TMBG also performed several fun songs off their upcoming children's album, No! (scheduled to be released in June) including "Two of Four" and "Robot Parade." The latter included John Flansburgh singing with the use of a vocoder to sound like a robot. During many of the songs, John Linnett [sic] switched between playing keyboards and accordion. More kookiness ensued with the giant conga trains moving throughout the audience during one of the songs. John Flansburgh sang as they chugged along, "don't cheat yourself of a good time, get in the conga line!"

Some old favorites TMBG played were "Birdhouse in Your Soul," "Particle Man," "Ana Ng," "Shoehorn With Teeth," and "She's Actual Size." (The only song they didn't play that I wanted to hear was "Whistling in the Dark.") Later in the show John Flansburgh introduced the "Band of Dans" and singled out the glockenspiel tech that had placed a glockenspiel (type of xylophone) at the very front of the stage. Then John had the drummer come up and play it. All he did was hit a single note every so often and the crowd went wild.

Opening band OK Go had a somewhat similar repertoire in that their music was quirky and silly. It was their second time at Hard Rock Live after having performed with TMBG last year. They topped off their set with a rockin' Rick Springfield cover of "Jesse's Girl." Surprisingly, the resurrection of that 80's relic wasn't a bad thing. After all, everyone was there to have fun.