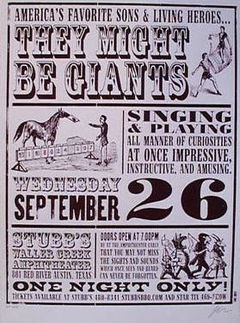 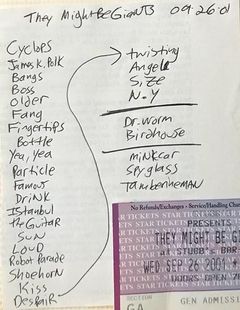 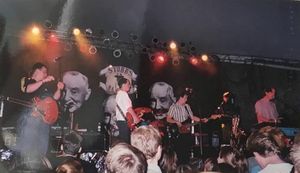 They Might Be Giants performing at the venue. (Photo by John Gross)

Istanbul: Dan played an excellent guitar solo, sounded spanish, no one expected it to be istanbul. The crowd went nuts. Particle: After this song I told John (Flansy) that he had a nice guitar. He told me that he had it insured, and then went on about how much fun it is to rip off insurance companies after you've had your stuff stolen. Actual: Dan did a ten-minute drum solo, in style of the infamous Dial-a-Song. Flans told the crowd to say a certain number, and Dan would do a certain style of drumming, which varied from Phil Collins to Keith Moon (!) to Animal from the Muppets. It was insane. Fingertips: Yes, I'm talking about #18-36 on Apollo 18. They played the WHOLE thing, with choreography. It was incredible.

In a nutshell, this was the most incredible show of my life. I drove up to Austin from Houston to see this show, and wasn't dissapointed. I was sitting three rows from the front, about three feet away from John Linnell. They opened up with Bangs, and the show just got better from there. The beginnning of the show was primarily promoting Mink Car, but they suprised me by playing an old favorite of mine, Lie Still Little Bottle. After that they delved into their much older and more obscure songs, including Shoehorn with Teeth and one of my favorites, Twisting.

During their reunitation of Flood, John Linnell was attacked by a monster moth, which he later complained about. Then they played Fingertips, which was one of the most incredible things I have seen in my life, it took my by suprise. Then, they started to play the songs that they seemed to like playing the most, such as Doctor Worm and The Guitar. Next, was the powerhouses of They Might Be Giants. They played fan favorites such as Particle Man and Istanbul, She's Actual Size, Why Does The Sun Shine, and interestingly enough, The Famous Polka. Then, they complained of curfew breaking, and left.

About a minute and a half later they reappeared to do a couple more songs (I can't recall which ones they did) and left once again. Then, the did a second encore to the audience's disbelief, and played Spy and Bidhouse in your Soul to close. Again, it was the best show of my life and well worth the trip.

The only downside that I noticed about the show was that John Linnell looked a little somber, I think it had to do with the events that took place on the eleventh. Does anyone agree with me when I say that They Might Be Giants needs to record one of these shows for a cd???? The show I went to was so much better than Severe Tire Damage it's ridiculous!!! If anyone else who went to that show can help out with the set list, it would be greatly appreciated. Email me at particleman02@aol.com or madmax34554@aol.com to talk about the show.

I grabbed a paper setlist after this show and corrected the list above (pretty good memory, though). They did not play (She Thinks She's) Edith Head because of time constraints, although it is listed as the first song of the first encore. Before the end of the regular set, Flansburgh told the band off mic to cut the song. Later in the second encore he joked that it was a legal necessity to wrap up the show up before midnight. The neighbors might call the cops.