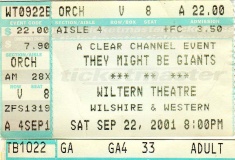 They Might Be Giants
— with The Incredible Moses Leroy opening —
Wiltern Theatre in Los Angeles, CA
September 22, 2001 at 8:00 PM

It's hard to adequately explain the incredible vibe of the room when the band played New York City at the end of the first set...just 11 days after 9/11. Many people seemed to be screaming "New York City!" during the choruses.

LINNELL: This has been one huge intervention.
FLANS: We traveled across the country and brought 1500 people here to let you know that you're in crisis and denial! You need to learn to answer to a higher authority, and that higher authority is people on stage with microphones and lights! You should listen to us, because your life is a mess!

FLANSBURGH: You know, we've been doing this song a bit slower than on the actual record. Maybe this makes people think we're getting old and tired.
LINNELL: I think ...'realize' is the more appropriate term for that one...
FLANSBURGH: So we play it slower not because we're old and tired, but as a deliberate musical choice.
LINNELL: I think we should play it a little faster than the record.
FLANSBURGH: I don't think that's possible, John, because when we made that record we were operating on 100%...caffeine.
LINNELL: But now we've cut it.
FLANSBURGH: ...with crystal meth.
LINNELL: Actually, I'm on helium tonight, so that should make up for it.
FLANSBURGH: So what are we doing here?
LINNELL: Hey Dan, why don't you count us off? He's our professional rhythm expert.

FLANSBURGH: As you might be able to tell based on the show so far tonight.

Too bad for John Flansburgh and John Linnell: their new album, Mink Car, was released on THAT day, 9-11. But they have managed to persevere and last month's show in LA at the venerable Wiltern Theater was not only well-attended, it was a downright smash.

The show was opened precisely at 8PM by San Diego's The Incredible Moses Leroy. Walking to my seat I had seen onstage a laptop and a small projector, showing an image of several black militants brandishing afros and pistols, labeled with the band's name in red. Though it looked very out of date, I still thought, "Uh-oh, what are we in for?" but Moses was nothing like that. Indeed when Moses, also known as Ron Fountenberry, came out onstage with a five piece band (including the guy on the laptop), the images on the screen changed to a pair of sock puppets who lip synched along with the band. It was just the sort of thing that a TMBG crowd would enjoy and they embraced Moses Leroy wholeheartedly. Clever video additions--clips from Godzilla movies and superhero cartoons--spiced most all the performances. The lyrics were whimsical, a song about sneezes, a song about love making you warm, and overall it was great fun. Put this guy on the good list; I'll have to track down his album, Electric Pocket Radio.

At 8:45 an acoustic trio came out that never bothered to give their name. They were not bad really, but I never did find out who they were and I didn't recognize any of the songs in the half hour set. Oh well!

On to They Might Be Giants, who hit the Wiltern stage at 9:50. The face of a smiling old man hung in triplicate on the backdrop of the stage. Otherwise the bands's lighting was very straightforward as the five member band came out with a lotta jump.

Linnell and Flansburgh specialize in catchy short tunes that almost seem like ad jingles. Is it any wonder? They started their career as a Dial-A-Tune service in Brooklyn so they had to get their hooks in quickly before the tape ran out on the old answering machine. They also became experts at clever little lyrics that sneak up behind you, yank your coattail and run away again. Never mind that they both sing in a nearly identical nasal whine and they use offbeat instruments like accordions, they are masters of their concise little world. It might be an acquired taste though.

Not the stuff to get folks excited? On the contrary, the Wiltern crowd was on its feet practically the whole night to the strains of TMBG favorites like "James K. Polk," "She's Actual Size," "Your Racist Friend," "Particle Man," "Fingertips," "Cyclops Rock" and "Man It's So Loud In Here." The tunes mostly were drawn from Flood, Apollo 18 and the aforementioned Mink Car, but perhaps the most poignant moment came whey they did "New York City" from Factory Showroom. After an hour and a half of their two and three minute jewels it was time for an encore of "Mink Car" and "Istanbul (Not Constantinople)".

Some of my earlier favorites from Lincoln and their first album were missing but no matter. It can only be said that these guys rock.