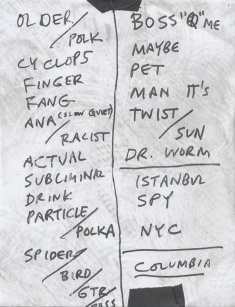 They Might Be Giants
— with Rustic Overtones opening —
Columbia University in New York, NY
September 1, 2001

New York City - Is at the end of the main set on the setlist, Older was first which was replaced with NYC.

James K. Polk - Iggy, who normally handles the shows' lighting was put out of his job by the sun, so he strapped on both confetti cannons and came on stage with one on each hip and fired them off at the appropriate moment.

Baba O'Riley - A cover which They played in sound check and during the show to fill time while Flansburgh was having technical difficulties.

Fingertips - During Mysterious Whispers, Flansburgh came down off the stage and while he sang the following Fingertip he shook the hands of four people in the front row, myself included.

She's Actual Size - Flansburgh writhing around on stage, even more then usual.

Particle Man - During the bridge which Linnell replaced with that Butterfly of Love song, Iggy came out again with reloaded cannons and shot the audience again.

"Disappointing Show" - A little improvised song, I wish I could remember more lyrics other then, "Disappointing show.. man, those guys blow."

Robot Parade - Maybe I Know was swapped off the setlist for this one.

Man, It's So Loud In Here - Original rock version, but Flansburgh told us that They will be performing the album version on Conan on the 7th.