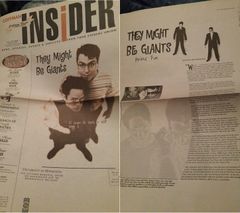 They Might Be Giants
— with You Were Spiraling opening —
University of Minnesota in Minneapolis, MN
October 8, 1999

Review by Chris Flenker:
This was the first tmbg show that I've been to, and it was great! It started with the band of Dans playing Drinking, then the Johns came out and joined them. They went right into Spider, and then one of my personal favorites, New York City. During James K. Polk, they shot off confetti at the first "big hit". It was awesome! Then during Particle Man and then again during Dr. Worm, John Linnell, at solo sections, broke into a song. I believe the name of the song is Here We Go Again, but I'm not sure about it. It was a great show. The opening act, You Were Spiraling was really good, too!