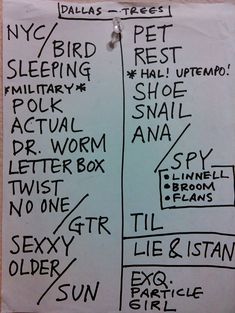 They Might Be Giants
— with Lincoln opening —
Trees in Dallas, TX
November 8, 1997

Review by Kris Maxwell:
This is the show where i learned i had the same fashion sense as TMBG. I was amazed to see them come on stage, all wearing black pants and orange t-shirts; the same as me. So, with the minimal discomfort of carrying my tape recorder in my pants, i managed to get a decent bootleg of the show, as well as a hug from a REALLY cute blond girl whom i will probably never see again (sigh). Anyway, about the show- I still think Lincoln is not that great, but they did not play for long, and did do their cool version of the Monkee's Stepping Stone. When TMBG came out, they had their usual shenanigans, introducing the cannon with a spiel about the Republic of Texas and proclaiming they were running for "god damned PRESIDENT" as they introduced "Till My Head Falls Off." After they played Letterbox, Flans realized that his guitar was *still* out of tune (the same thing had happened weeks earlier in St Louis). He traded it in for one that was better, because he had "filled it... with chocolate." They also did The Sign in "Particle Man", a song they introduced as being from their album _Sea Hunt_. All in all, they seemed to be really enjoying themselves, and though i got a piece of a wax earplug lodged deep into my ear for the next few days, i had a good time too. And, if you happen to be that really cute blonde girl (and im sure you now who you are!), don't hesitate to come find me.

Great show. The puppets came out for Exquisite Dead Guy.