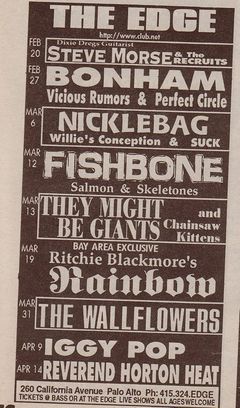 April 9, 2005 - The setlist was reconstructed by me from old TMBG mailing list entries and the listing at tmbg.net. The listing at tmbg.net looks like it was transcribed from a bootleg but ends after Twisting, the other songs were listed according to my memory and other contemporary setlists, I believe it must be accurate, but it is conjecture.

The band was in high spirits as this was the last U.S. show on this tour before they went to Australia. Then was about to be released and John and John performed some songs as a duo with a backing tape in honor of this. This was done as a discrete set in the middle of the show while the rest of the band left the stage.

There was a decorative backdrop on stage. There were smallish white (cardboard?) panels hung on monofiliment line with various images: The halftone closeup of Pearl (from inside the Why Does The Sun Shine? EP), the current TMBG logo (TMBG in four blue speech bubbles as inside the Factory Showroom packaging), or just a backing of reflective foil.