From This Might Be A Wiki
< Shows
2 wikians attended: Eviltikimonkey Knucklehead Jones 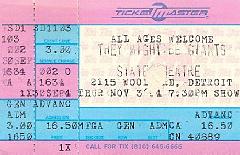 The show was opened by Frank Black, alone onstage with a guitar, and then another guitar over that one, and then he added another, until he was wearing 4 or 5 at the end of his set. Frank was not a small man at the time, so he looked a bit like a black pin cushion for guitars with a little bald head on top. I recall he sang some song about Pong.

And then it got dark, and the countdown chant began, with more experienced TMBG concert-goers holding up their fingers to count down along with the countdown voice (Linnell?), and then the Johns and Co. took the stage. I can't remember much of the set list, but it was fun to see Flansburgh jamming and dancing in his full, manic glory. He did, however, take time to admonish the crowd against the practice of crowdsurfing, warning that "it's a supercharged bummer to get someone's heel right in your eyesocket." I have used the term "supercharged bummer" as often as possible in the years since, and you should, too.

As this show took place a few days after Halloween, Flansburgh said that it would be appropriate to play a Halloween tune, and so the band rocked out Edgar Winter Group's "Frankenstein." I learned that there is no point in ever playing this song without an accordion in the arrangement. That was the encore, and the final number, and we all went home happy.