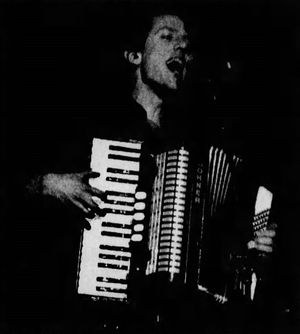 RED BANK — As I write this, it's been a full 16 hours since I've seen the newly-improved, 1994, "John Henry"-era edition of They Might Be Giants, and I have just one question left.

Exactly when did they turn into a big-time rock 'n' roll band?


Last time I looked, they were just the two Johns from Brooklyn: quirky pop masters John Flansburgh and John Linnell, working guitarm accordion, saxophone and drum machine flavors into their own sideways-leaning stew. It was unusual, so-geeky-we're-cool music that spoke to nerdy college types, people who'd grown tired of the typical, and not many others.
But Monday's appearance by TMBG at the Count Basie Theatre was a horse of a different color. Working a big rock beat in front of 1,000 screaming fans, the two Johns boasted an honest-to-goodness band, complete with horn section, bass player and a huge, booming drum kit.


That part wasn't much of a surprise — they've been working with a live band for two years now. But the audience, crammed with enthusiastic, high-school-age-and-younger types, was astounding.
From the moment their wacky, pre-taped introduction counted down the seconds to TMBG's onstage appearance, the assembled fans roared like a '90s recreation of Beatlemania. They weren't just glad to see them walk from the wings; they were fanatic, fervent to a degree geeky college folks are usually too self-conscious to approach.


Kicking off the evening in their duo format, with drummer Brian Doherty tagging along on a stripped-down setup, Linnell and Flansburgh didn't give their audience anywhere to put that energy — at least in the beginning. Bare-bones versions of tunes like "Meet James Ensor" (a song about a dead Belgian painter; you can't get more geeky and collegiate than that) and "They'll Need a Crane" didn't offer much room for pogoing or dance moves, though that didn't stop the fans from trying awfully hard.


By the time they pulled out the full drum kit, bass player and horn section for the convoluted twists of "Don't Let's Start" and "AKA Driver," you could almost feel the relief — at last, a beat we can mosh to.
And mosh they did, though the crowd-surfing didn't really start until the band's inspired cover of Steve Miller's "The Joker" during the first of two encores. Strangely, though the huge drums and live band made TMBG's quirky sounds more accessible, they also made them more, well, usual.


Wry tunes like "Sleeping in the Flowers" and "The End of the Tour" — both from the group's first album as a band, last month's "John Henry" — lost a little of the complexity found on disc, replaced with a straight-ahead modern rock vibe that could be found in any band.
Still, the sight of anti-guitar hero Flansburgh triumphantly holding up his ax to squeeze out the two-note guitar breaks in "Snail Shell" (besides the Steve Miller cut, perhaps the closest thing they got to a pop song all night) was worth the price of admission. Sometimes, it seems, geeky collegiate types really do finish first.