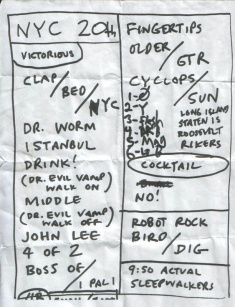 They Might Be Giants
— with People Are Wrong, The Moldy Peaches, and Messer Chups opening —
Central Park in New York, NY
August 15, 2002

"We did a big pre-show in Central Park with like 8,000 people there. And we actually did our very first show in August of 1982. So, to actually be back in the same place where we started, playing for a gigantic crowd of people, on a beautiful summer night, was just like a really - it was a special time."

That summer two friends of mine did a road trip around the States and my one proviso was that we got back to New York to catch this gig. I don't really remember that much about them playing more the great atmosphere. The Giants had turned the corner in 2002. After the wilderness years they'd found their niche with the kids album and the Malcolm work. They seemed really happy. When you choose your favourite band as a kid, in the main you get four or five years if you are lucky. I remembering worrying after Flood that they might break up, but they've kept delivering and I've kept buying all their stuff. Because I love them.

I was 4 years old, but I distinctly remember my dad taking me into the city to go to this show. I remember having a blast, especially since they played what was (and still is) my favorite TMBG song, Doctor Worm. They're the best band in the world and I'm so glad I got to see them with my dad as many times as I did before he passed.