Music From Malcolm In The Middle (Promo)

While an official soundtrack album was released for Malcolm In The Middle, it lacks the incidental music that They Might Be Giants created for the show. Much of this material is included on two slightly different promotional discs, detailed below. 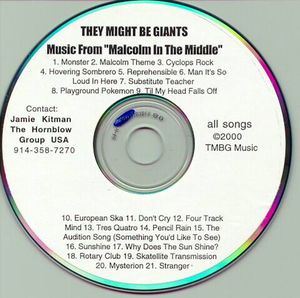 The CD for the promo disc.