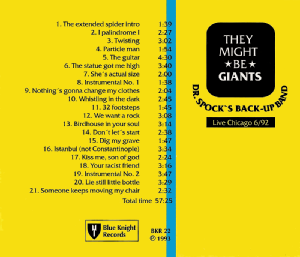 Dr. Spock's Back-Up Band is a bootleg featuring live recordings from the June 27, 1992 Chicago show. From the liner notes:

They might be giants, they might just be Dr. Spock's back-up band, but they definitely are one of the most gifted pop bands around.


Since almost twenty years the two eccentrics John Flansburgh and John Linnel are working at their common multiangeld conception oft the world. Since 1988 they set their results to music and they have blessed us with five albums so far.
When in 1990 'Birdhouse in your soul' entered the U.S. charts it came to them as a surprise. 'We just play funny music for odd people. We don't fit for the charts' said John Flansburgh. Anyway the duo from Boston is wowing the U.S. college circuit since.
The show on this record will give you an impression of what's happening when the two kings of snip are entering the stage, and you'll understand instantly why they are cult. 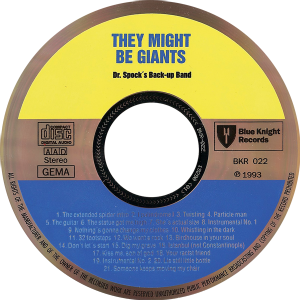