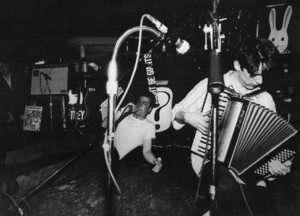 CBGB was a music club on 315 Bowery in New York that operated from December 1973 to October 2006. They Might Be Giants performed at this venue frequently in the 1980s, with their last known show at the venue being in 1993.

Hilly Kristal founded the club on December 10th, 1973 and named it CBGB, an acronym for Country, Bluegrass and Blues. Although this was Krystal’s original vision, the venue soon became known for hardcore punk in the early 1980s.[1] One of the band’s earliest shows at the venue was their first show with Bill Krauss,[2] who joined the band after watching them perform one of their first shows at Dr. B’s in SoHo.[3] John Linnell also performed at a CBGB show in a hand-cast, not long after he broke his wrist in a crash while working as a bike messenger,[4] which was one of the events that kickstarted the Dial-A-Song service.

Joshua Fried, a long-time collaborator with They Might Be Giants, worked as a soundman at CBGB in the mid-1980s. They Might Be Giants may have done a soundcheck with The Stick at a show while Joshua Fried was still a soundman for the venue.[5] In a 2014 Tumblr post, John Flansburgh mentioned the sound system of CBGB: "The sound system was impressively full but impossibly loud, making all acts that played the simple wooden stage fill the room with explosive sound. No one could talk over a band, or really talk at all when bands were playing."

CBGB had a structure for bands to follow in order to get shows for weekends. They Might Be Giants had to march through this structure throughout their time at the club. The band worked up from Monday to Thursday nights and eventually made it to weekend shows at CBGB. They Might Be Giants also played Amateur Night at the club once and came home with two dollars apiece according to Bill Krauss.[6] Flansburgh talked briefly about CBGB’s structure in a 2018 interview with Consequence:

CBGB was very much the official gatekeeper of the New York rock scene at that time. It seems so surprisingly democratic, but there was so much demand for bands to play there that they set up this very clear structure for bands to march through to get to a weekend gig. There’d be an audition night, and if you passed that, they’d give you a Monday or Tuesday show, and if you brought in a lot of people, you’d get up to a Thursday or Friday or Saturday show. It took the better part of a year to get from audition night to a Thursday night, and if you didn’t keep on playing, you’d get pushed back.

On May 10th, 1987, John Flansburgh organized a “Gay Men’s Health Crisis AIDS Benefit” at CBGB. This show was a multi-act show featuring many different bands, one of them being The Ordinaires, whom the band met at 8BC in the mid-1980s.[7] The concert was a success and raised more than $1,200 to help fight the epidemic.[8]

Likely during the production of the Lincoln album, They Might Be Giants had "gruff voiced" CBGB owner Hilly Krystal record the vocals to their song "You'll Miss Me," but ultimately "chickened out and had Flans sing it instead," according to the liner notes to Then: The Earlier Years.

They Might Be Giants’ last show at CBGB was on December 8th, 1993, and was a part of the club’s 20th birthday celebration.

In 2005, CBGB was sued by Bowery Residents’ Committee over allegedly unpaid rent amounts, but the case was lost. However, a deal to renew CBGB’s lease failed and expired in 2006, officially marking the end of the venue. On October 15th, 2006, after Patti Smith had performed her last show at CBGB, Hilly Krystal closed the club permanently.[9]

John Linnell recounted the setting of CBGB and the bathroom of the venue in a Village Voice blog post from 2013:

A lot of bands at that time put up with a lot of extreme discomfort. You’d go into CBGBs and you had to sit in what looked like a bombsite, where the dressing room was just utterly torn to bits, but of course we were excited to be there and didn’t care that much at the time because we were happy to be gigging. Apparently they’ve recreated the CBGBs bathroom at the Met, in the Punk Exhibit? I’m curious about that. The weird thing about the CBGBs bathroom was that people felt very comfortable ripping the drywall from the walls and graffiti-ing up the whole place, but the one thing I’ll say is the CBGBs bathroom always had a bar of soap! [laughs] I never went down there when there wasn’t soap in the sink. It always seemed like this weird little oasis of civility, where they actually cared enough, even in this incredibly trashed, dark environment where you didn’t know what you’d touch if you put your hand out, to have this lovely bar of soap in it. There was something very grounding about that.