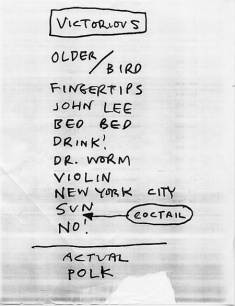 
McSweeney's set (not sure about the placement of some of the songs):

They Might Be Giants
— with Trachtenburg Family Slideshow Players opening —
Athenaeum Theatre in Chicago, IL
October 25, 2002 at 8:00 PM

The Trachtenburg Family Slide Show Players were quite interesting. I want to buy their CD's but I'm not sure how fun they would be without the slides. They spent about 10 minutes trying to get their equipment working. Then John Hodgman, the host for the evening, explained that he was qualified to be the host because he knew about literature because he used to be a literary agent, and then wrote an advice column called "Ask a Former Literary Agent," in which he answered questions about how to get published and how to deal with werewolves, and he knew about music because he studied viola and clarinet. Then he asked the audience to cheer to indicate which instrument they preferred. "I want the clarients and the violas to take sides and hate each other, because they're both me, so it will represent my soul."

After Edith Flans and Dave Eggers came out to explain how the concept of the issue and then the shows originated. Flans said "This is our first time doing this. We had two paid rehersals in Philadelphia and Washington, DC and a dress rehersal in New York that was attended by over a thousand people." Eggers saineesomething about a guy who's running for governor here begging them not to do the shows, and saying "What will the children think?" Flans said, "The children need these shows. Like they need television, like they need cereal with more than 100% sugar, like they need a ride to school because school buses are so dirty and walking to school is so hard." Then he told us to think of the show as, among other things I can't remember, "the Rat Pack, only WASP-ier."

Hodgman introduced Arthur Bradford as "the tallest writer of dog-centric fiction." He was very cute and smashed his guitar again. TMBG came out and played with just the smashing part, but it was an exciting moment for me because it was the first time during the show that Linnell was wearing his glasses.

Au Contraire was very cool. Does the DAS version have accordion? I can't remember and don't have access to any of my mp3's right now. Hodgman said that because it's not on an album, if any of us were trying to bootleg it it would be scientifically prevented from showing up.

Hodgman read a modified version of the Carl Sandburg poem "Chicago" to introduce Dave Eggers. He read part of his new book but first explained what was going on it, and then said "Does that make sense? You?" and pointed at me. I said yes and he continued. During the story John and John played snippets of Up Where We Belong, We Built This City on Rock 'n' Roll (they actually just sang on that, with their fists in the air), and that Spandau Ballet "I know this much is true" song (Linnell did the "ah ah ah aaaaaah" part, it was fun), and Miller played part of Stairway to Heaven.

Before Bangs Linnell said it was in the issue, but they'd since updated it to include parts of the story. Then when they stared to play his voice kinda cracked, so they had to start over. He said something like "We're continuing to update it, by playing it wrong."

Eddie Joe Cotton read from his book about being a hobo while wearing a hat with a king of spades card in the brim and sitting by an open suitcase. Miller provided some background music.

Ira Glass talked about Iraq. When he started talking about evil in general, Hickey and Weinkauf accompanied him, and later Miller joined, on keyboard for some reason. Ira said that every time he saw an ad for the recent movie "Resident Evil" he thought it said "President Evil."

The regular portion on the show was disappointingly low on banter, but here's what there was.

JL: We want to thank you all for sticking around. JF: I'm so glad all those old people left. I'm celebrating my 42nd birthday today. (This is of course not true.) *something else I can't remember*

JF: This is a brand-new song off our brand-new album Apollo 18. *They play Fingertips* JL: Thank you for staying standing during that song, I know it's not really a dance number. But it is a...standing-up song.

JF: This is a song off our new album. We like to call it the title track, because "titular track" sounds obscene.