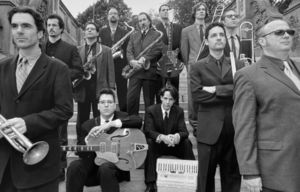 O'Connor with the Velcro Horns

Jim O'Connor has joined They Might Be Giants live as early as 1994. He played flugel horns on "Mink Car," and trumpet on "S-E-X-X-Y," "John Lee Supertaster," "Mr. Xcitement," "Unsupervised," "Withered Hope," and "Bee of the Bird of the Moth," as well as several Severe Tire Damage tracks (notably "Return To The Planet Of The Apes"). In addition, he arranged and performed the trumpets on "Empty Bottle Collector." O'Connor appeared in the "Doctor Worm" music video, although, like most of the guys in there, he did not play on the recording. He and Dan Levine lead the Velcro Horns. O'Connor played trumpet as part of the original Sapphire Bullets line-up, and he has also collaborated with Mike Viola.