Very odd. Musically lovely. Lyrically and vocally? The song falls halfway between being a song for adults or for kids. If the latter, a different singer might have been advisable, perhaps Robin, Flans wife. As it is the lyrics read like something an odd 13 year old might write. Too many of Linnell's recent songs are so emotionally withdrawn that it's hard to connect with the subject matter and yet again he sounds very detached when he sings. Singing about underwater women is surreal in the same theme of Birdhouse, but there is no fun or joy in this, and any pathos that's trying to be generated by this is washed away (ho ho) by the absurdity of it. Morrissey can sleep easy! I'd quite like an instrumental version of this, or a remake with a different vocal/lyric. In its present form, I doubt I will want to re listen. Glean is so far proving the most disappointing release since the Else. From Linnell, only Erase is suitable for an album release. Hopefully Flans will come to the party next week. The Giants sound like a band that need a producer to give constructive advice. (Mr Tuck)

I ... I just don't get it, Mr. Tuck. Why is it necessary to keep posting these long-winded, snootily titled diatribes describing your disdain for every new song that comes along? I mean, you're free to state your opinion, of course, but why do you bother listening at all if you have such a problem with their recent output? You seem to be pining for a return to form but which form and why? I enjoy their early work — I really do — but I don't think trying to recreate it is smart or even practical, unless they want to become a parody of themselves. Besides, Linnell, in a recent interview, said (I'm paraphrasing) he can here the musical progression in their music but can't really put a finger on what's changed. They aren't their own historians. They're just doing what they've always done; making music that appeals to them. If it no longer appeals to you, maybe it would be wise to stick to the albums you like. I like The Else (and Morrissey, by the way). It's among my top ten favorite albums of all time. I don't like it because I'm a super-fan who think they can do no wrong. I like it because it appeals to me and so have many of their new songs, including this one. If it doesn't hit your ear right, that doesn't mean it's "emotionally withdrawn" or "like something an odd 13 year old would write." It just means you don't like it and, although that's A-OK, maybe it would be more productive and less stressful (for you) to praise the songs you like than to poo poo on the songs you don't. --Propman (talk) 00:36, 25 March 2015 (EDT)

I'm glad someone agrees with me, the fact that almost every new song by TMBG is stuck with a pretentious, nitpicking review at the top of the Discussion page is pretty cringeworthy, to be honest. (PurpleToupee37)

Not only that, but the fact that all those new pages keep getting created, and they only turn out to be talk pages or interpretation pages. What is the need for all of this when there are other things that need to be cleaned up, such as the pages for the songs from the "Flood Live in Australia" album? Whenever I go on a tangent of edits, I do it with a "cause for the greater good" vibe that I try to bring. You do this for I don't know why. invisiblehippo97 09:02, 26 March 2014 (CST)

I think it was established last week that my "long winded, snootily titled diatribes" has a fan base and I'd like to thank every snooty diatribe long-winded lovin' one of 'em! (Mr Tuck)

Some people seem to read your more negative statements in 72pt caps with the positive and neutral coded the same color as the page background, but it's all the same format to me. --Sonderling (talk) 15:12, 27 March 2015 (EDT)

In answer to Self Called Nowhere, I'd argue that you can go pretty much anywhere on this site and find unstinting praise, but when I post I try and be balanced. Look at a lot of my reviews and they are very positive, but on others I am honest if I feel a song has failings. My latest review says that musically it's lovely, lyrically and vocally less so. Many years ago John Linnell wrote a song called I should be allowed to think satirising closed thinking. If you like the song, good for you I respect your opinion. Please allow me the courtesy to express mine. I might think that slavish uncritical hero-worship is cringeworthy by a poster but I'd be too polite to ever point it out. I just stick to the song, not the person writing an opinion. Sam Stephens below, disagrees with me, and explains exactly why she does, which is kind of the object of the exercise to start a debate. She doesn't criticise my right to speak, merely critiques my review. This is as it should be. (I've not posted a reply to her because I can't argue with her personal response to the song). (Mr Tuck)

I don't know if your little bit about "slavish uncritical hero-worship" is directed at me specifically, but if it is I must say I resent being accused of that just because I actually don't hate everything. I'm not going to be "critical" of something I think is excellent. Also I don't understand why you're saying this is "in answer to me" when two other people before me wrote much longer things. --Self Called Nowhere (talk) 00:18, 27 March 2015 (EDT)

(A bit late, but...) To be fair, at least Tuck has (over the past few years) realized that "Interpretions" isn't the place for one of his reviews. That, and he's stopped reviews like "It's about a snail... yawn" (Snail Shell). Other than that, I do find most of his reviews annoying. -Bouncer15111

Gotta disagree with Tuck. True, it is odd and emotionally withdrawn. But it's also strangely tragic. Why? Because the "Underwater Woman" is odd and emotionally withdrawn. Surrounded by shipwrecks, pretending to enjoy conversations with imaginary voices, staring at a photograph, living in a place far away from the world where no one can see her cry. No one knows what's in her heart; all that we have are disjointed cold facts with little emotion attached. Through the facts, a sad story of a lonely girl emerges. I think Linnell nailed this one. My favorite DAS so far. (Sam Stephens)

I agree with Sam completely on this song, and as for the review discussion, I for one actually appreciate Tuck's reviews. Sure, I never agree with them (except for No Cops, that song was just too strange not to love), but they let me look at my favorite band with a grain of salt. I mean, I'm probably going to like the song regardless of his opinion, so what does it matter? It's a discussion page. He's discussing the song. (Sureliant)

Bird of the bee of the moth[edit]

I'm surprised nobody has yet commented on Linnell's weird over-enunciation in parts of this song. It's what keeps me from liking it; in fact, the way he sings "unn-durr-wa-turr lay-dee" bugs me so much it's hard for me to resist the urge to skip. A shame, because the music is really cool. Does anybody else feel the same way about it, or is it just me? I usually love TMBG songs with accents (such as A Self Called Nowhere, Stuff Is Way, Impossible, etc.), but this one I can't stand. --Freakiosis (talk) 17:50, 5 May 2015 (EDT)

It's rated low on the wiki song ratings list too. (Mr Tuck)

I heartily applaud of the creators of the videos who make a special effort to integrate the images with the song. This video is notable for selecting a single audio element - the high brass chord - to cue the ultrasonic blips. I also like the way her steps from her front door to her car are matched to the beat. Other lovely touches: the dramatic swim through the kelp at the start, the ironic poster on her office wall, the crab climbing a rock to watch over her poignantly, and the kelp growing on her limbs as she ages. --Nehushtan (talk) 12:34, 12 September 2019 (EDT) 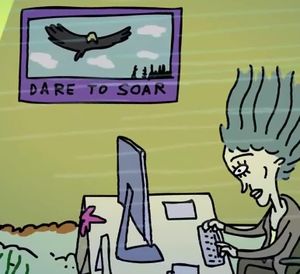