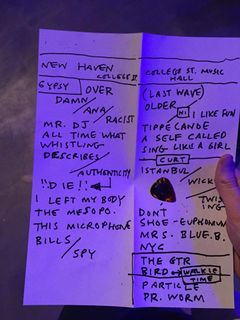 Linnell came out in glasses and never took them off. Flans was like "what's the deal, that's my schtick, if you wear glasses I'm just the fat guy," Linnell consoled him by claiming himself as the skinny guy.

The band sounded good! Both Johns had fresh voices and hands, Curt and Dan pulled off some particularly impressive feats of musicianship. I can't believe they're playing Wicked Little Critta, I'm positive they just went through the samples on Linnell's keyboard's memory and thought "well, we could always put Wicked Little Critta back in..." Which Describes How You're Feeling and Mrs. Bluebeard have never sounded better, and I love having Curt on All Time What and accordion on Let's Get This Over With. All that's left is Flans needs to tour with the bass drum again for back-to-back Let's Get This Over With & Whistling In The Dark~

We bounced before the encores to catch a train, but a local child filled me in on the bonus songs. Good show!

edit: one more thing - Flans was late coming into the second verse of New York City and kept delaying and delaying his re-entry, eventually he just started mumbling semi-musically and the band continued as though he were singing. I have no idea how much of it was a joke, but we were laughing for a solid 90 seconds. Love that man. -j2

It was truly an amazing show. I don’t get to go to a ton of their shows because of how young I am, so I was freaking out during the entire show. The setlist was great, I loved to hear Let’s Get This Over With live for the first time, which had already become one of my favorite songs by them. I gotta say it was one of the best nights of my life. I even got a signed version of I Like Fun!!!

If you’re a person that’s never been to a TMBG concert, you have to find a time to go. It’s truly an experience of a lifetime!