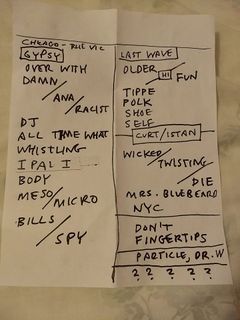 This was my 34th show, and it was easily one of the best I've been to. Great setlist, great banter, great crowd, but actually started with a little bit of confusion. The tickets said Doors 7, Show 8pm, but there was an email from the ticket vendor the week before stating that it was actually Doors 8, show 9pm. I got the memo, a lot of other people didn't, so by the time I got into line around 6:30pm, it was already down the street and starting to wrap around the building. Since the building was blocking a lot of the wind (and because I parked about half a mile down the road), I wasn't too cold in the 40 degree weather, but I guess that a few others complained to the TMBG twitter beforehand, and so we were let in about half an hour early.

The way the Vic is set up, it is tiered standing on the floor (I'm guessing they put chairs there for other shows), and a balcony with all seats - it's your basic old movie house. After picking up one of the last 5 copies of the very limited Flood Live album (which Flansburgh forgot to sign and doodle up), I headed the rest of the way in and found a spot in the second row, stage right, by the speakers. This was a great spot for the Quiet Storm set, and not bad for the rest of the show, either.The set list was very good, as you can see, but what I really enjoyed was some of the banter.

For "Hey, Mr. DJ," JL started introducing it, said that he didn't remember what album it was from, and Flansburgh went on a tangent about where it was recorded and what type of equipment it was recorded on. He also mentioned that it was one of the only TMBG songs to feature a fade out. In response, JL said that they should try it during the show... which they did, though Marty had to remind them beforehand that JL needed to keep going after everyone else faded out. So, that was fun.

Another bit of banter, JL started talking about an Eagles documentary (to which JF interjected, "You must have the patience of Job"), where Don Henley starts complaining about whiners and says "I want to take their inner child and kick its little ass." Then JF starting on a tangent/TEDTalk about Timothy B Schmidt, briefly the bassist for the Eagles.

There were a few other random banter moments, but those two were the most random, I'd say. Like I said above, the crowd was really into it, and the performance was just fun. Whether or not they did, it just looked like the Johns and the rest of the band were having fun, so it was just a good vibe all around - despite it being a tad bit warm in the venue.

I just wanna say that while I was standing in line, there were like 3 weirdos standing near me talking loudly and saying that "Why Does The Sun Really Shine?" was "sexy". (???????????)