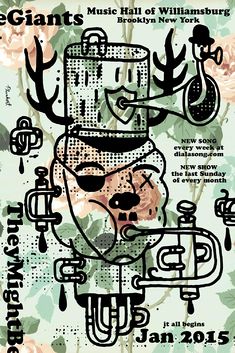 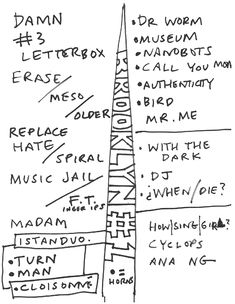 Two bosoms walk into a bar...

A spotlight exploded and I got yelled at for filming, all in one night! Oh yeah, the music was nice too.

No joke - this show was so good that it caused a "potentially historic" blizzard to occur in the Tri-State Area the following night. TMBG was at the top of their game and firing on all cylinders, after a year-long deep slumber from touring. The night's theme may as well have been surprises; the first one came when we spotted the Tricerachops Horns loading their gear into the venue before the show (which wasn't billed as including horns). Following a riveting duo performance of "Istanbul", the horns came out for "Turn Around" and played with the band for the rest of the show until the second encore, sounding fantastic on both the old and new material they learned.
The new and improved setlist was full of enough surprises to please both eager new fans and the "hardened recidivist" long-term TMBG attendees. I personally was on my toes the whole night with no idea what would be coming next, which is a rare and magical event - I felt like a kid again. You can bet I sported a goofy grin for the entirety of "Man, It's So Loud in Here" and "Spiraling Shape", both of which I'd never heard live before, as well as all the new Dial-A-Song Direct tracks. Near the end of the main set, there was yet another surprise: the live debut of the 2011 "Authenticity Trip", which fits like a glove into the live show and featured an exceptional performance from Flansburgh.
I screamed, jumped, danced, sang along, took photos and was, for a good two hours, in my happiest of happy places. Thank you, They Might Be Giants.

QUICK SHOW REVIEW:
Tremendous performance, and, at times, a little like sitting in on a rehearsal. I'll just get this out of the way now - Linnell was off, and I haven't seen Flans play stronger since the John Henry days, before they got a second guitar player.
A few notes and trivia:
Damn Good Times - Miller's solo was incredible. Flans was hilarious during the quiet part. During the outro, one noticed immediately that Flans' guitar was turned up for a change. The overall sound of the venue was nice and balanced, better than usual MHoW.
Letterbox - Flans' rhythm guitar was flawless, and high in the mix.
Erase - first performance. Linnell looked at his lyrics towards the end, but they'll eventually be able to play this one in their sleep, I'm sure.
Mesopotamians - Linnell skipped the 2nd verse and went straight to the end, and joked after the song that it wasn't a very good verse anyway.
Replacements - JL hit the wrong chord on the beginning! After that, it was near perfect performance.
Villanelle - introduced as the real first performance, since they messed it up the last time. Amazing song, JL's vocal delivery was flawless (think 'I'm all you can think about').
Music Jail - I can't believe they pulled this one off. Anyone who was fortunate enough to listen to this on the podcast the other week before it was taken down knows that this is by far the strongest DAS song thusfar. Flans nailed all his intricate guitar lines, and his vocals. JL and MB had fun with the syncopated key/drum break. Part 2's twisty vocal falsetto line really got Flans warmed up for some really great vocals on Fingertips, which they played next.
Fingertips - the only thing to really mention, aside from it being a strong performance, was that Flans downplayed or left out entirely his interjections during 'Heart Attack', which made the song much better, in my opinion.
Madam - Flans spoke at length about the incredible Johnny Carson clip with a drunk Oliver Reed arguing with Shelly Winters - he said though it wasn't the inspiration for the song, it should have been, and it makes the song more interesting. The clip is worth youtubing, and he's absolutely right - it does enhance the song.
Horns came out on "Turn Around" and stayed until the end of the first encore.
Man it's so loud - so happy that they've brought the rock arrangement back. Also, happy that Flans is doing the harmonies rather than the "oohs" over the chorus - works so much better.
Cloissonne - with Stan Harrison's arrangement! So good - was this the first time they actually used the horns on this one? IIRC, even at horn shows, they've usually done this as a quintet. Linnell's contra-alto clarinet sounds so much better than the bass clarinet, he was amazing. Was this the first time he played this horn live?
Museum - with horns, awesome.
Nanobots - it is really effective for Robot Flans to sing the beginning and then disappear off stage and jump back in for his parts at the end. I know he was having guitar issues, but this bit of theatrics worked in his favor.
Call you Mom - guitar issues continued and Flans wasn't present for his vocal harmonies toward the end. Linnell looked to his left, a little surprised when he realized Flans wasn't there.
Authenticity Trip - First performance!! With a new horn arrangement by Dan Levine - they nailed it. I love this song and I'm thrilled that they are bringing it into their live show. After, Flans had the band riff on the changes to introduce the horn players, and the brilliant Stan Harrison took an extended solo at his urging.
With the Dark - JL spent a few minutes organizing his notes before the song. Flans told him that it wasn't really a good time for this, to which JL replied something like "do some talking, Flans". Of course, as soon as Flans got started with his story, JL was ready to start the song. Great performance, with the horns.
How can i sing like a girl - I'm sure the videos will surface of this... in short, JL forgot to go to the second verse, and they stood there chatting for a few minutes in the middle of the song about it.